Americans’ Approval Of Labor Unions Is Highest In Years

Americans’ Approval Of Labor Unions Is Highest In Years Americans are viewing labor unions more favorably than they have in recent years.

“As Labor Day approaches and economic conditions in the U.S. remain tenuous, Americans’ 65% approval of labor unions is once again the highest it has been since 2003. Public support for labor unions has been generally rising since hitting its lowest point of 48% in 2009, during the Great Recession. 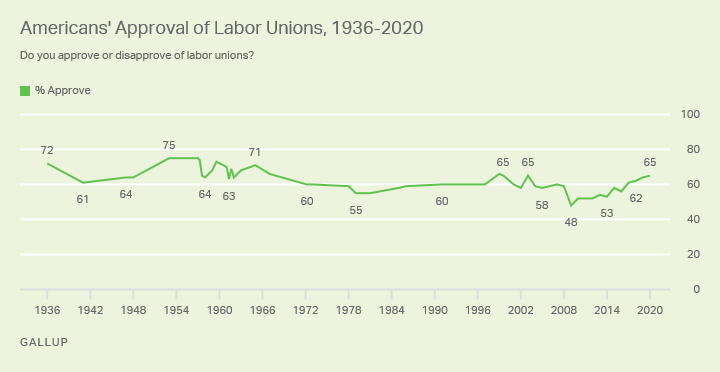 Gallup’s initial reading of the public’s support for labor unions was 72% in 1936, at the advent of the modern U.S. organized labor movement, and approval peaked at 75% in 1953 and 1957. The lowest ratings to date have been recorded during particularly weak economic times. This includes the late 1970s and early to mid-1980s — when support fell below 60% for the first time — and 2009 through 2012, when it hovered around 50%.

While the latest reading, from a July 30-Aug. 12 poll, comes at a time of severe economic upheaval, this has so far not had a negative impact on the public’s view of unions, as it is little changed from last year’s reading.

Americans’ support for unions is politically polarized, as it has been since 2001, when Gallup began tracking the measure annually. Democrats’ current 83% approval of labor unions is the highest on record since then. At the same time, 45% of Republicans and 64% of independents approve of unions.

In 2009, 66% of Democrats, 29% of Republicans and 44% of independents viewed labor unions favorably. Since the Great Recession, union approval has recovered among all three major party groups.” 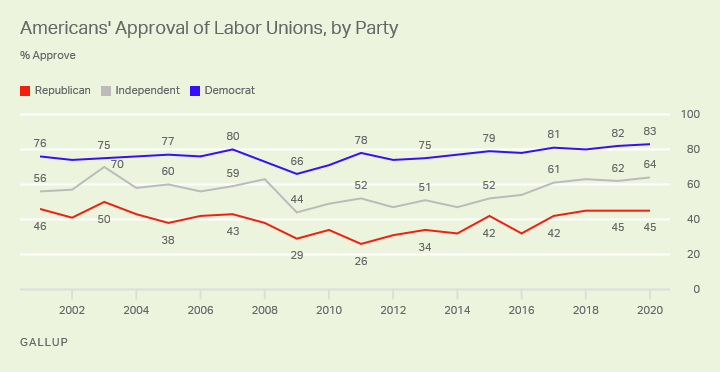 For the rest of the story, visit Gallup here.