The GOP promised workers that wages would rise significantly if only taxes could be cut. The data is starting to pour in and it looks like workers are getting little from the tax plan.

“When Republicans delivered $1.5 trillion in tax cuts last December and slashed the corporate tax rate from 35 percent to 21 percent, they said it would come with a big wage boost for American workers. Except it hasn’t.

Over the weekend, this chart from Bloomberg showing private data from PayScale’s wage index swept across Twitter. It shows a drop in wages in the second quarter of the year. While wages have risen by 12.9 percent overall since 2006, wages adjusted for inflation (so-called ‘real wages’) have actually fallen by 9.3 percent.

And between the first and second quarters of 2018 — after the tax cuts were enacted — real wages fell by 1.8 percent. 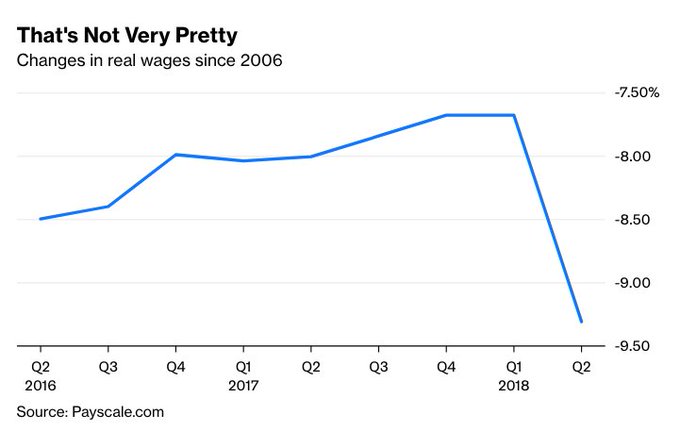 As Noah Smith, the Bloomberg writer who highlighted the PayScale data in a story on the tax bill’s benefits for workers — or, rather, lack thereof — points out, official Bureau of Labor Statistics data from the second quarter isn’t available yet. Two quarters might be too early to gauge the tax bill’s effects on wages.

Still, the data out there is discouraging: According to the BLS, wages and salaries increased by about 2.7 percent year over year in the first three months of 2018. That’s pretty much in line with inflation. And even as unemployment levels are historically low, worker pay isn’t rising.

The Republican tax bill has been a major windfall for corporations and the wealthy.

According to estimates from the Center on Budget and Policy Priorities, the top fifth of earners get 70 percent of the bill’s benefits, and the top 1 percent get 34 percent. The new tax treatment for “pass-through” entities — companies organized as sole proprietorships, partnerships, LLCs, or S corporations — will mean an estimated $17 billion in tax savings for millionaires in 2018. American corporations are showering their shareholders with stock buybacks, thanks in part to their tax savings, and have returned nearly $700 billion to investors this year.”