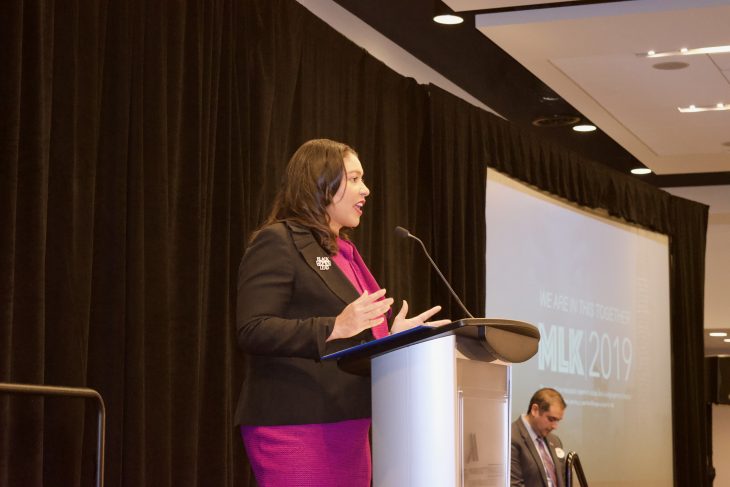 Martin Luther King Jr. had said, “The time is always right to do what is right.” This and many other quotes by Dr. King were echoed by those who filled the Marriott Marquis Ballroom on January 21 for the annual MLK Labor and Community Breakfast, hosted by the San Francisco Labor Council.

The political, labor and spiritual leaders who spoke at the event compared the nonviolent battles fought by King to the activism needed today in the face of an unnecessary federal government shutdown, family separations at the border and other crises.

“This is a pivotal time in our country, and we could not be better served than by the inspiration of Reverend Martin Luther King,” said Nancy Pelosi, Speaker of the U. S. House of Representatives. Pelosi described King as “not a President but a leader beyond” and spoke of his emphasis on the “fierce urgency of now” and the present action needed to honor King’s legacy with the spirit of courage.

The urgency was echoed by U. S. Senator and recently-announced presidential candidate Kamala Harris, who sent remarks via video in lieu of her presence at breakfast. “We’re at an inflection point,” Harris said, urging everyone to fight for dignity, equality and democracy. “We’re fighting for something and not against something,” she added.

The annual breakfast, which began in 1985, was followed by an MLK March. Mayor London Breed marched alongside other political leaders and activists following her speech at the breakfast. Breed vowed to take action against the wealth disparity that plagues the city and praised the recent success of reaching a citywide project labor agreement as well as a successful strike by Local 2 hotel workers, who also served food at the morning gathering.

“This holiday offers us a time to reflect on Dr. King’s message — a message of racial equality, economic justice and peace,” said Rudy Gonzalez, executive director of the San Francisco Labor Council. “It gives us an opportunity to think about what that means for us in our time.”