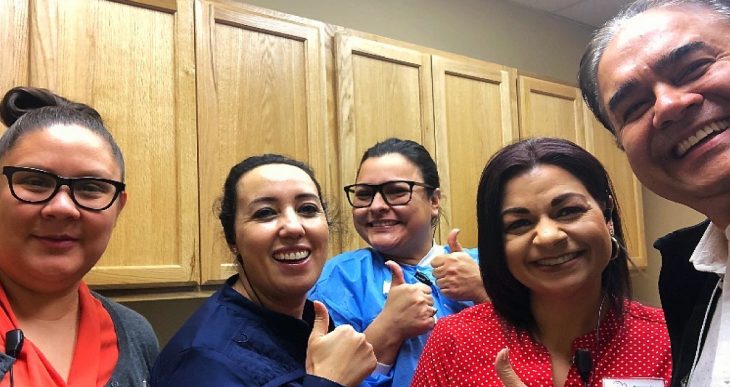 When the COVID-19 pandemic hit, many dental practices closed their doors. But Aava Dental, which has proudly served union members and their dependents for 20 years, stepped up to the front lines.

Aava Offices are providing palliative emergency dental care for patients free of charge during the pandemic. If a dental emergency arises, said Aava’s Founder and CEO Dr. Abraham Ghorbanian, the team at Aava will be there to make the pain go away and return a smile to the patient’s face.

“It just felt like the right thing to do,” said Dr. G. “So many people have lost their jobs or don’t have enough hours to qualify for their health care benefits. Not only did they have the hardship of trying to put food on their table, on top of that, they had a dental emergency and didn’t know where to turn.”

Aava centers, which have offices in California, Oregon and Washington, took similar measures during the economic recession in 2008. “So many dental offices are closed, and dentists are scared,” Dr. G acknowledged. “I feel like we went into the healthcare profession knowing that there are going to be extreme situations like this, or earthquakes where dentists are called on to identify bodies. I am disappointed to see some of my colleagues in the community who are just hiding.”

“We feel we wanted to go in the other direction,” he continued. “Not only do we want to be open for all of the emergencies and take care of people, but we want to take care of those who cannot afford it — at no charge.” Routine check-ups, cleaning and cosmetic procedures are not included in the palliative emergency care offer.

Dr. G states that a large part of Aava’s patients are union members and their dependents. In addition, the staff at Aava is also fully unionized with employees belonging to the Teamsters in California, the Machinists in Oregon, and United Food and Commercial Workers (UFCW) and Teamsters in Washington. In the midst of the crisis, Aava has been reaching out to unions not only to let them know that Aava’s doors are open, but the Aava has also sent out care packages of food and school supplies to union offices as well as protective gear like masks, wipes, and gloves to help the local unions’ office staff stay safe.

This strong union connection and the shared mission is important said Sonia Fernandez, a U.S. Marine, member of Teamsters Local 63 and now the Executive Director of Labor at Aava Dental.

“I’ve spent 16 years in the labor movement and there’s nothing that fills your heart more than providing emergency care and supporting our union family during this pandemic as they care for their members. These are people that are there not for limelight or self-satisfaction,” said Fernandez. “It’s about doing the right thing and that’s what you continuously see in the labor movement – people dedicated to those who don’t typically have a voice and providing it for them.”

Dr. G said that Aava will continue to offer these critical emergency services as long as they are needed, and until life returns to some degree of normalcy.

Helped me out big time:
“I had dental emergency. The dentist from Aava Dental’s Fullerton office was very knowledgeable and I got an appointment five days later where a more advanced doctor looked at my situation. They were able to save my front tooth and help me out big time. I really think Dr. Ghorbanian and his staff have a great organization. I think he’s helping a lot of people that’s something we should all support.”
– Chris Guerra, IBEW Local 11

Putting the patients first:
“Out of all the dentists I’ve ever had, none of them have ever come close to the good treatment I’ve received at Aava Dental. I’ve been a patient for a few years now, and even before my wife had the coverage, they saw her for free because I am a union member. They put the patients first. They have the doctors and the technology to do everything, and they treat union members with the utmost respect and priority”
– Joseph Largura, Teamsters 952

To learn more about Aava’s dental offices and services for union members, visit the site here.