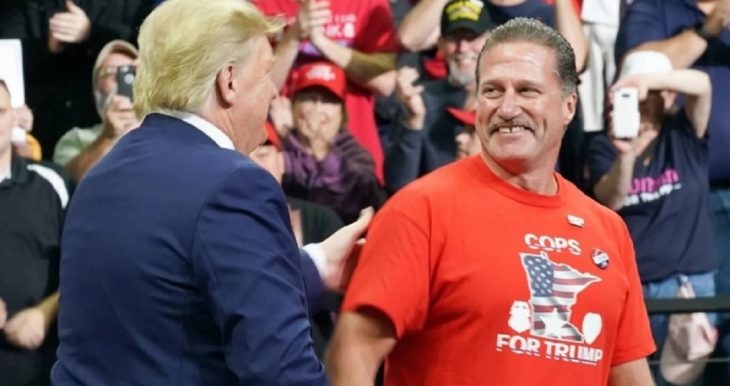 Demands for the resignation of the head of the Minneapolis police labor union are growing louder, with the state’s AFL-CIO chapter adding its voice to the chorus.

“The state’s largest labor federation is joining the call for Minneapolis Police Union President Bob Kroll to resign in the wake of the officer-involved death of George Floyd.

Minnesota AFL-CIO President Bill McCarthy issued a statement Tuesday afternoon asking Bob Kroll to hand in his resignation immediately, saying he has failed the labor movement and the residents of Minneapolis.

‘Bob Kroll has a long history of bigoted remarks and complaints of violence made against him. As union President, he antagonizes and disparages members of the Black community,’ said McCarthy. ‘He advocates for military-style police tactics making communities less safe and the police force more deadly. Despite his conduct, Kroll was reelected with an overwhelming majority. If Bob Kroll does not value the lives that he is sworn to protect, then we can only expect more death under his leadership.’

McCarthy says instead of seeking meaningful dialogue with the community or seeking reform to make sure what happened to George Floyd never happens again, Kroll is instead seeking to have the officers involved reinstated.

‘Unions exist to protect workers who have been wronged, not to keep violent people in police ranks,’ McCarthy stated. ‘All four police officers involved in George Floyd’s murder must be charged.’

Later in the day, the president of Education Minnesota joined the AFL-CIO’s call for Kroll’s resignation.

‘Educators and other members of organized labor are committed to seeking racial justice,’ Denise Specht said in a statement. ‘There is no place for leaders who support or defend racist actions and policies in our movement. Through his actions and words, Lt. Kroll has shown himself unfit to lead in the modern labor movement.'”

For the rest of the story, visit KARE 11 here.