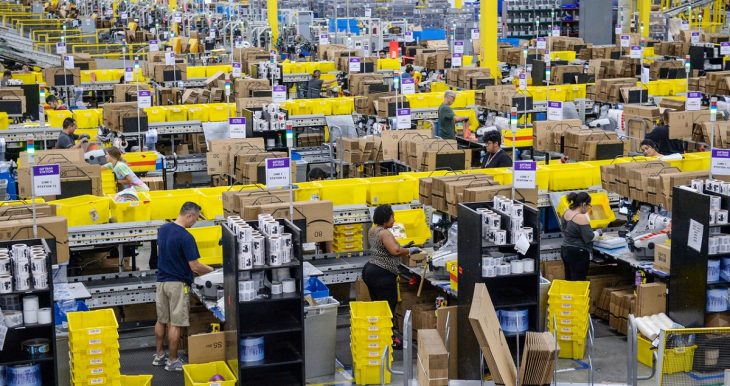 It’s no secret that Amazon, and its founder Jeff Bezos, made billions during the pandemic. Yet despite the surge in profits, the company cut employee hazard pay, which was a measly $2 an hour, in June.

And now the company reveals for the first time how many workers tested positive for the coronavirus during the ongoing pandemic.

“Amazon released data Thursday showing that 19,816 employees have tested positive or been presumed positive for COVID-19 since the pandemic began.

The online retail behemoth said in the statement that it chose to share the COVID-19 infection rates among Amazon front-line employees in hopes other companies do the same.

Amazon kicks off career fair with 33,000 work-from-home jobs up for grabs

According to the company’s own analysis of 1,372,000 Amazon and Whole Foods Market front-line employees across the country, the 19,816 number is substantially lower than the general population rate, as reported by Johns Hopkins University, “accounting for geography and the age composition of our employees to make the data as accurate as possible.

Amazon said it found that the workforce case count would have been 33,952 using the general population rate.

The company has faced criticism in the past when it comes to COVID-19 and its employees. An NBC report found that a “lack of transparency, combined with the lack of federal protections for U.S. workers who contract infectious diseases” make it nearly impossible to track the spread of COVID-19 at Amazon.

Amazon said in the release that it became clear in March that testing employees would “be of critical importance” and assigned employees from different backgrounds to a team tasked with that mission.

In late March, roughly 100 workers at an Amazon warehouse in New York walked off the job demanding the facility be closed for cleaning after a co-worker tested positive for COVID-19, and they be given paid time off. Amazon fired the worker who organized the strike, saying he repeatedly violated the company’s social distancing guidelines.”

For the rest of the story, visit WRIC here.