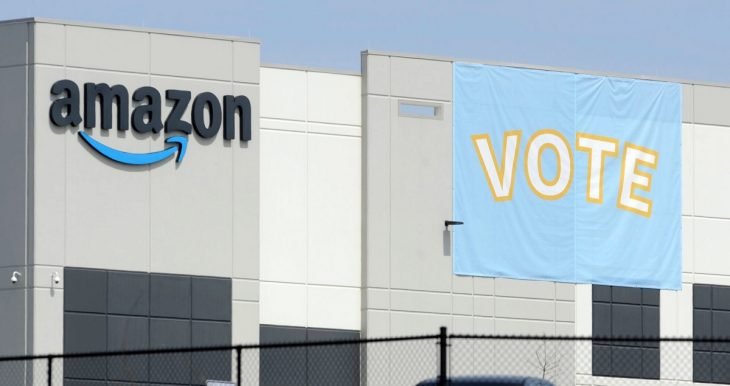 Amazon is a pro at messing with union elections. The union representing warehouse workers in Alabama says Amazon is, incredibly, interfering in an election that is being held because Amazon was found by the NLRB to have interfered in the first election.

” A U.S. retail workers’ union on Tuesday accused Amazon.com Inc of unlawfully interfering with a union election at an Alabama warehouse where the company had already been found to have engaged in unlawful conduct to deter labor organizing.

The Retail, Wholesale and Department Store Union (RWDSU) filed charges with the National Labor Relations Board (NLRB) claiming Amazon removed union literature from employee break rooms, limited workers’ access to the warehouse before and after shifts and forced workers to attend anti-union meetings.

Amazon in a statement provided by spokesperson Kelly Nantel said it was confident it had fully complied with the law.

‘Our focus remains on working directly with our team to make Amazon a great place to work,’ the company said.

Scrutiny of working conditions at Amazon has intensified in recent months, with some employees seeking to organize at facilities in New York and Canada. A victory at even one warehouse would be a milestone that labor experts say could invigorate the U.S. labor movement.

The NLRB sent unionization ballots to workers at the Bessemer, Alabama, plant earlier this month and will tally the votes at the end of March.

The RWDSU was handily defeated in an election held last year, but the NLRB threw out those results after finding that Amazon unlawfully influenced the vote by encouraging workers to place ballots in a mailbox on company property.”