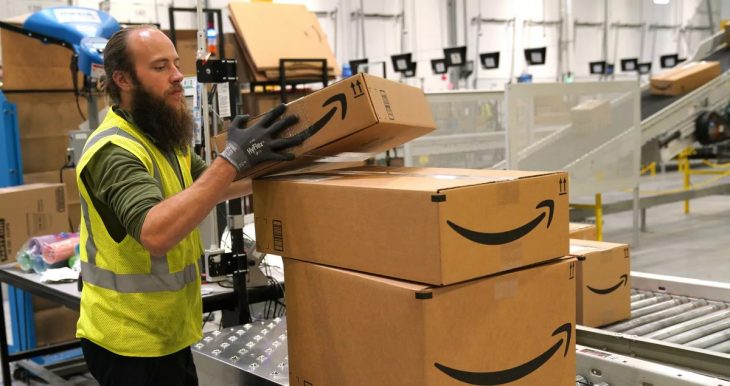 Workers are fed up with Amazon’s reluctance to give them a paid day off to vote.

“Workers at Amazon are calling on groups around the country to help shut down Amazon warehouses temporarily on Halloween if the company does not give all its employees a paid day off to vote.

The move is an escalation of the internal pressure being put on executives at the company, the country’s second-largest private employer.

In the past week, more than 6,500 Amazon corporate and tech workers have supported a proposal for all workers to get a paid day off to vote. Others have written to Jeff Bezos, the company’s founder and chief executive.

The organizing is led by Amazon Employees for Climate Justice, which has also mobilized thousands of corporate employees over the past year and a half to push the company to address its climate impact.

‘We’ve gotten zero responses… crickets,’ the group said about the company’s response to the proposal. The group called for other organizations to help close warehouses for 15 minutes on Halloween by blocking the exits used by Amazon’s trucks and vans.

The group said it had already lined up commitments from 350 Seattle, an environmental organizing group, and the King County Labor Council, a coalition of unions in the Seattle area, to try to shut down some Amazon warehouses in western Washington.

‘It is really to disrupt work for the day, for at least 15 minutes, and to hold space and send a message that this is a very critical election,’ said Valerie Costa, the interim executive director of 350 Seattle. ‘We think it is really important that the country’s second-largest employer gives time off to vote given that people are waiting in line for hours to vote.’

Amazon has more than 600,000 workers in the United States. The company did not immediately respond to a request for comment about the call for a temporary shutdown.”