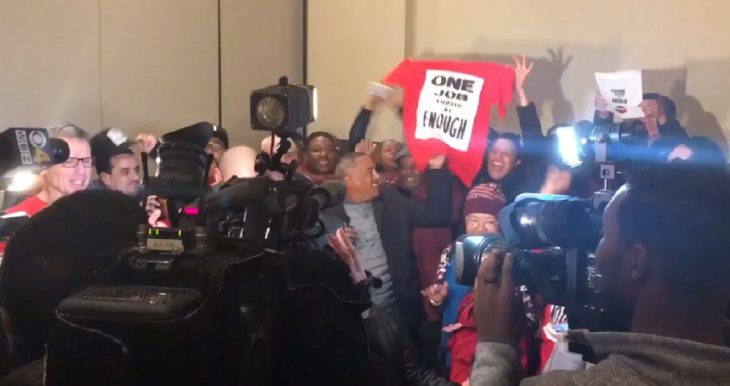 UNITE HERE Local 26 has announced a tentative agreement with Marriott in Boston’s first ever hotel strike.

BIG NEWS! We have reached a tentative agreement and have a ratification vote scheduled for 2pm at the Hynes Convention Center today. No picket lines tomorrow! See the moment workers walking the final picket lines of the day heard the news. #MarriottStrike #1job pic.twitter.com/BntBnKEsvn

Boston 25 News reports on the development:

“After going on strike for months to protest unfair wages, hundreds of Marriott hotel workers with Boston’s Local 26 union may soon vote on a new deal.

On an announcement via Twitter, Boston’s Local 26 union said they reached a tentative agreement and have a ratification vote scheduled for 2 p.m. at the Hynes Convention Center on Saturday.

After months of negotiations, more than 1,500 housekeepers, cooks, servers and dishwashers have been voicing their dissatisfaction with unfair wages, many arguing they should not have to work more than one full time job to provide for their families.

Some of the local’s members must work second and third jobs just to cover their family’s living expenses and rent, the union says, and ‘One job should be enough . . .’

The last time Local 26 went on strike was at Harvard in October 2016. Dining hall workers walked out for 22 days before eventually settling on a contract with the university.”

For the rest of the story, visit Boston 25 News here.