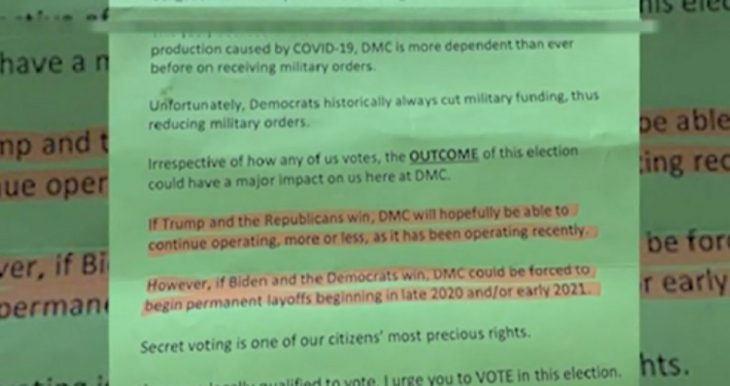 A Trump-supporting company president has issued a stern warning to employees.

“In central Florida, workers at one company are wondering if their future employment has anything to do with how they vote after their employer put letters in their recent pay stub envelopes saying if President Trump doesn’t win re-election, they might lose their jobs.

A Trump 2020 flag flies outside Daniels Manufacturing in Orlando, where dozens of employees told reporters they were upset to receive the letter from DMC President George Daniels.

The company, which makes tools and electronics for the aerospace, military and aircraft industries, has been weathering the economic downturn.

The letter warns, ‘If Trump and the Republicans win the election, DMC will hopefully be able to continue operating, more or less as it has been operating lately. However, if Biden and the Democrats win, DMC could be forced to begin permanent layoffs beginning in late 2020 and/or early 2021.’

One employee, Stan Smith, said he considers the letter offensive, and he’s quitting as a result.

‘Everybody has a choice to make their own decision,’ Smith said. ‘I don’t feel like it was correct to do something like that. That’s like me coming to work … wearing a Black Lives Matter shirt and bringing out hats and passing them out to everyone. I felt like it was unfair.’

Other workers said they were too afraid to be fired to speak with reporters but that they felt intimidated by the letter.

Reporters discovered Daniels has contributed more than $600,000 to President Trump and PACs that are supporting him and other Republicans.”

For the rest of the story, visit watch the full video by WRAL below: