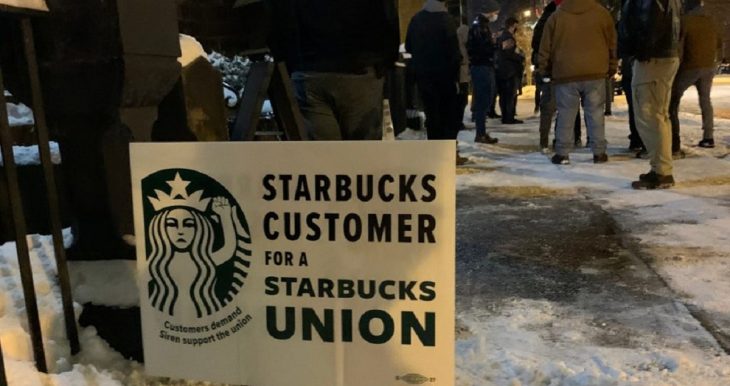 The following piece originally appeared in DC Report and has been reprinted here with its permission.

In 2021, increasing numbers of workers discovered their post-Covid pandemic power by  engaging in work stoppages and unionization drives across the nation. It’s taking lots of guts, determination and a renewed sense of class consciousness not seen in decades to try and transform the American workplace. Consumers can help.  But can they overcome their addiction to one-click convenience to do it?

In Buffalo, N.Y., Starbucks customers supportive of unionizing baristas are showing they are, indeed, changing their mobile order names to things like, “Union Strong Annie” and “Vote ‘Yes’ John.”

“Since we won [the union election last month], we’re having customers come in who are brand new to the company who say, ‘Hey, I didn’t have any desire to patronize Starbucks until I saw that you were a union store. Now, this is where I’m going to get my morning coffee,’” Elmwood Avenue barista Michelle Eisen recently told me.

This past year saw tremendous consumer support for striking workers at numerous high-profile companies, among them Frito-Lay, Kellogg’s and Nabisco.

Buffalo baristas describe the level of support they’ve been getting for their groundbreaking unionization drive as “insane” with local community members continually asking, “How can I help? What can I do?”

It’s just the kind of consumer awareness and worker solidarity Teamster George Boada would like to see out of an American buying public still so addicted to the ease of online shopping that many seldom think about the horrendous working conditions of those fulfilling their needs.

The 45-year-old married father of one has worked for the same New Jersey-based food company for a quarter-century but he has started feeling increasing pressure from the Amazon e-commerce juggernaut as it undercuts every brick and mortar business in sight.

“People don’t realize when you sit down at home and you’re shopping online and you click the button, as soon as you click that button there’s a warehouse employee putting together your order,” Boada told me in December.

“There’s a driver at 3 o’clock in the morning racing to get it to you. There’s someone out there fighting through traffic to deliver it. You need to think of those people — not just sit down and say, ‘Oh, this great —click! I got what I wanted’.”

Boada’s increasing anxiety prompted one reader to comment, “My sister lives at Amazon. She gets packages almost every day. It’s one thing to depend on Amazon in need — although I don’t — another to buy more crap just because it’s easy and you can enrich [Amazon founder] Jeff Bezos.”

Starbucks Workers United Casey Moore, a barista, agrees that public support for unionizing stores in Buffalo has been incredibly strong, and it is calling on the MVP base of customers to take even more direct action.

“Starbucks doesn’t really listen to their [employees],” the 25-year-old told me. “[But] they listen to customers. So, if consumers want to help then they should call on Starbucks to stop union busting because [Starbucks] is not living up to their mission and values, and it’s not an ethical thing to do.”

But some insist workers shouldn’t count on consumers throwing down with exploited employees even when automation threatens to put everyone,  white collar and blue collar workers alike, out of a job.

“I wouldn’t put too much hope in that,” Martin Ford, author of Rise of the Robots: Technology And The Threat Of A Jobless Future said after the publication of his dystopian book.

“It would be nice to think that people would rebel and not use it on that basis. But the fact of the matter is when you’re wearing your consumer hat and not your worker hat, you look for the lowest price.”

As Ford further pointed out, Amazon already littered the American landscape with the desiccated corpses of its victims without too much notice.

“Circuit City is gone, and no one really cares about that. They just order the cheapest thing online,” he said.

Others disagree and insist consumers will flex their muscles if the stakes are high enough.

In 1955, the yearlong Montgomery Bus Boycott succeeded in striking a serious blow to Jim Crow-era segregation and helped spark the entire Civil Rights Movement in this country.

Just 3.5 years ago, mounting consumer backlash against all things Trump helped convince feckless first daughter Ivanka Trump that she ought to disband her once profitable lifestyle brand.

This past year saw tremendous consumer support for striking workers at numerous high-profile companies, among them Frito-Lay, Kellogg’s and Nabisco. Stickers urging Nabisco consumers to “Respect The Strike” started appearing on grocery store shelves stocked with unsought boxes of Oreo Cookies and the like.

“There’s more of a bridge now between consumers and union workers, especially ones that are striking,” Labor 411 social media director Sahid Fawaz said.

“And I think the reason might be because, you know, there is what’s called, quote-unquote, a labor shortage. [Although] some would say it’s a pay shortage.

Labor 411 is an online union directory of union-made goods and services that has seen its own Facebook following jump by some 16,000 subscribers since last fall. Publisher Cherri Senders says public support for hard-pressed employees really took off nationwide after witnessing just how quickly bosses tossed workers once heralded as essential under the bus.

Despite the ongoing struggle, Senders is optimistic.

“I actually think [public support for workers] started when workers were deemed ‘essential’ and that sort of fizzled pretty quickly…and the Great Resignation brought it back,” she says. “This is really labor’s moment. This really is — if we don’t blow it. This is our moment to have our workers shine.”

Eisen, too, is enthusiastic about this tumultuous moment in the nation’s history.

“This is the biggest upheaval that this country has seen in decades,” Eisen says. “I definitely think the catalyst for that was more than likely the pandemic — which is awful that it took a global pandemic for people to realize they deserve better than what they’re getting. But if that’s what it took, then I’m glad that we’re here.”