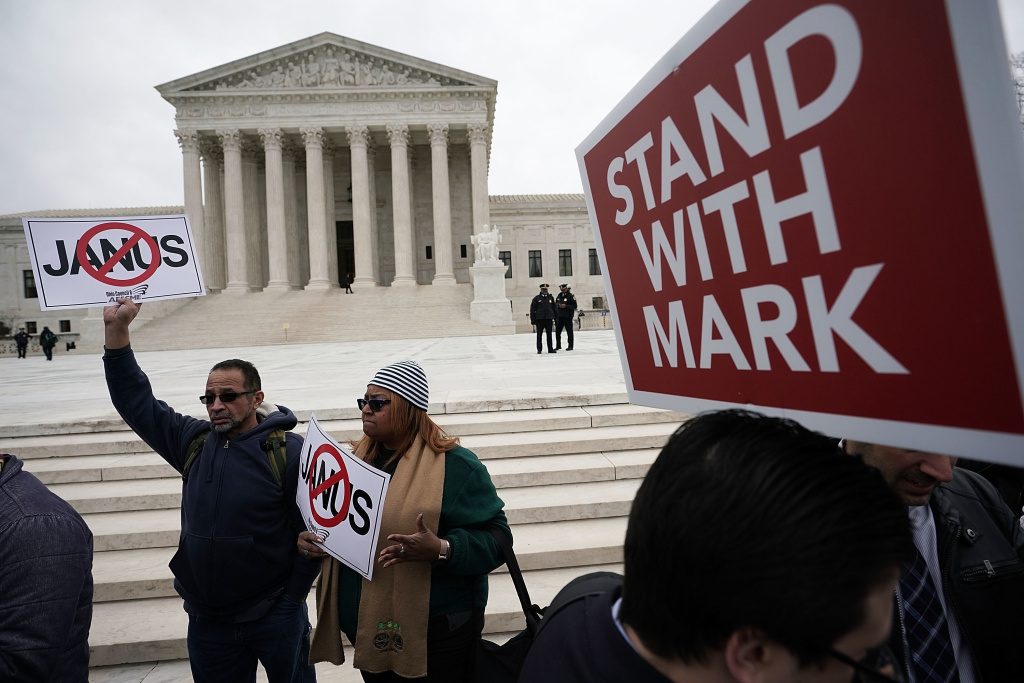 The Supreme Court is expected this month to issue its opinion in Janus v. American Federation of State, County, and Municipal Employees, a closely watched case viewed as a bellwether for the future of unions. At issue is whether unions have the right to mandate collection of agency fees from non-members. According to the current law of the land, they can, because even non-members benefit from collective bargaining.

Pro-union forces see it as yet another attempt to chip away at union viability, and they are not wrong. The issue has been part of the supply-side’s long game, and this is their third time at bat in recent years. In 2014, the Court decided 5-4 that the Illinois Public Labor Relations Act violated the First Amendment by allowing unions to collect from non-members but refused to rule decisively, reversing in general, affirming in part and remanding a 7th Circuit Court of Appeals decision in Harris v. Quinn.

As with Harris, this latest challenge comes courtesy of the National Right to Work Legal Defense Foundation, once again led by advocate William Messenger on behalf of the plaintiff, Mark Janus. Janus is a child support specialist for state government in Illinois. Both cases deal with state employees.

In 2016 the issue came up again, but the court was split 4/4 (absent Antonin Scalia) in Friedrichs v. California Teachers Association, with Jones Day’s Michael Carvin for the plaintiff. Janus, then, is a do-over of sorts. What these courtroom crusaders are taking aim at is a 40-year-old Supreme Court ruling, Abood v. Detroit Board of Education. Decided in 1976, Abood sanctioned non-member fee requirements — referred to as”fair share” or “agency fees” — as long as the funds were used for universal activities like contract negotiations and not “political speech,” such as lobbying.

That demarcation line that is no doubt difficult to trace, hence the brisk pace of Abood challenges. Predictably, Scalia’s replacement Neil Gorsuch is expected to cast the deciding vote. Interestingly, he was inscrutable during oral arguments February 26. SCOTUSblog reporter Amy Howe offered an insightful analysis along with some good context: “before Gorsuch served on the U.S. Court of Appeals for the 10th Circuit, he was in private practice, where [defense counsel David] Frederick was one of his law partners.” One credits Gorsuch with the professionalism required for a neutral assessment, while at the same time feeling he will not give the defense argument short shrift.

Patrick Wright assesses Gorsuch’s judicial tendencies in an article for The Hill that explains how the Court’s newest member is a textualist when it comes to interpreting statutes, “which generally means he reads Congress’s texts as written and he then applies those laws without transforming them to meet his policy preferences,” and an originalist when it comes to the Constitution: “That means in Janus he will try to understand what the First Amendment meant at the time it was adopted and apply that understanding to modern issues like forced subsidization of union speech.”

Wright, who filed an amicus brief in support of the petitioner, is of the mind that “the unions will survive without agency fees.” Considering his position, this could just be an lip service. But it’s hard to imagine it not being true. The unions have endured through many challenges. They are the yin to capitalism’s yang, and while both sides at times seem zealous past the point of self-interest, the pendulum swings and eventually they seem to balance each other out. Unions have, in the past, demonstrated the cleverness to work within the new rules. After all, before they were called “agency feels” they were “union dues.” No doubt there will be growing pains should organized labor be forced to adapt to new rules, but adapt or die is a mantra suited to both sides. The battle itself is proof each is adapting.