Despite Billions In Profits, Deere Offered Workers 20 Cents An Hour Raise A Year, For Six Years

Despite Billions In Profits, Deere Offered Workers 20 Cents An Hour Raise A Year, For Six Years 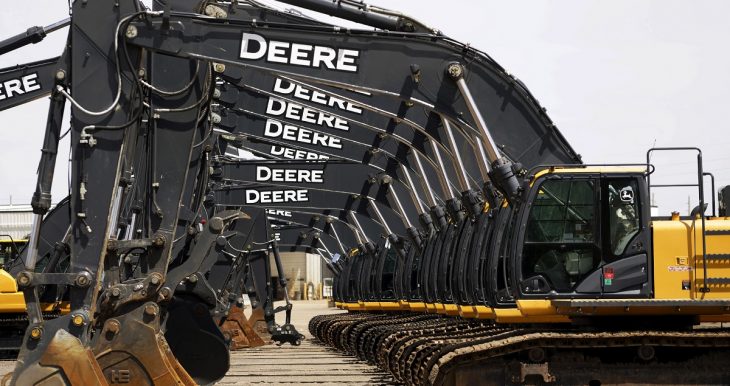 A stingy tractor company is getting nowhere with workers who refuse to be paid peanuts.

“As John Deere union workers mull their first strike since 1986, some report dissatisfaction with working conditions and their union representation. They also say they feel they are empowered by the company’s high profits and a national labor shortage.

After overwhelmingly voting down a contract Sunday night, United Automobile, Aerospace and Agricultural Implement Workers of America Union 281 said the bargaining committee was recalled Monday morning, and a hard strike deadline of 11:59 p.m. Wednesday was set. A strike-duty roster is in circulation.

Members of that union say they were already experiencing mandatory overtime, an increasing workload, and lack of support from managers. Then came a contract they found inadequate.

They voted down the contract because of low wage increases and decreasing retirement benefits, according to one Quad-Cities union worker, who spoke on the condition of anonymity, because of the fear of retribution.

The worker said working conditions have gone ‘downhill’ since they started.

‘Deere is not telling people what’s really going on,’ the worker said. ‘We want them to cough up and show that they care about the workers and that we’re part of this family.’

The contract offered incremental wage increases over six years, equal to about a $1.20 raise in hourly pay at the end of the six-year contract, the employee said. Given the company’s record profits, that raise wasn’t acceptable.

‘We were not being recognized as the contributor to that,’ another union worker said. ‘I’d like to see the record profits, quarter after quarter, show some of the same love in which they show the shareholders.’

Office workers receive better treatment and more acknowledgement and appreciation for their work, while production workers are treated as “second-class citizens,” they said. Any past appreciation, like parties or gifts for exceptional employees, have disappeared.”

For the rest of the story, visit the Quad-City Times here.