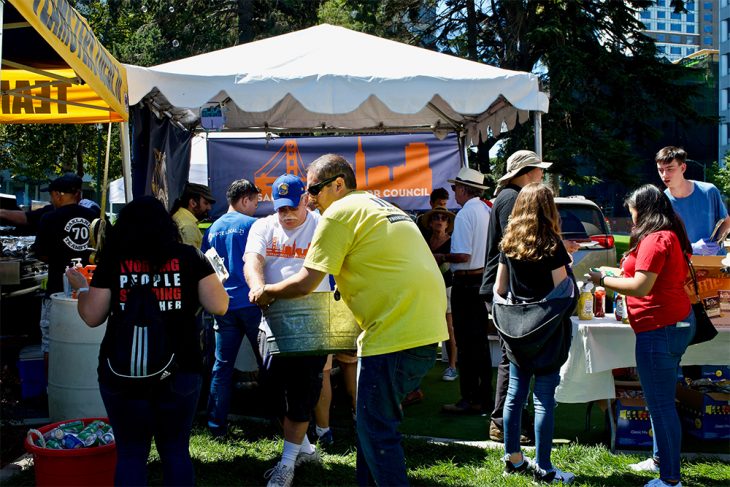 This year’s Labor Day holiday marked a historic gathering of labor advocates from the Bay Area and beyond. The first Labor Day Together! picnic was held at Snow Park in Oakland, bridging the gap between four counties represented by the San Francisco, Alameda, Contra Costa and San Mateo Labor Councils who organized the event with the AFL-CIO.

Hundreds of union members and labor supporters gathered at the sunny park to celebrate the power of labor and communities standing together. The event was filled with booths from various organizations, speakers representing the four counties, food and festivities. Most importantly, there was an abundance of dialogue about issues of concern to working men and women.

The picnic coincided with a protest mere blocks away against Kaiser Permanente’s underfunding of necessary mental health services, harming both patients and workers, despite huge profits.

“This fight is like many of our fights,” said SFLC Executive Director Rudy Gonzalez. “It’s going to require unprecedented coordination and unprecedented solidarity. It’s going to mean that everyone has to stick together, because these corporations see us as numbers. They see us as files. They don’t see us as people. The issues that we fight for are the ones we believe in.”

Unions from across the region were joined by local and state representatives to spread the message that workers are being squeezed even in progressive cities like Oakland and San Francisco. Art Pulaski, Executive Secretary-Treasurer of the California Labor Federation, took the opportunity to bring attention to the mis-classification of two million workers in the state as independent contractors who lack essential protections. Pulaski and others spread the word about AB 5, a proposed bill to grant gig workers employee rights.

“Labor punches hard when we have to defend our workers and our people,” said Pulaski. “We’re going to be punching pretty hard.”