Hundreds March Through Beverly Hills in Support of Waste Workers

Hundreds March Through Beverly Hills in Support of Waste Workers 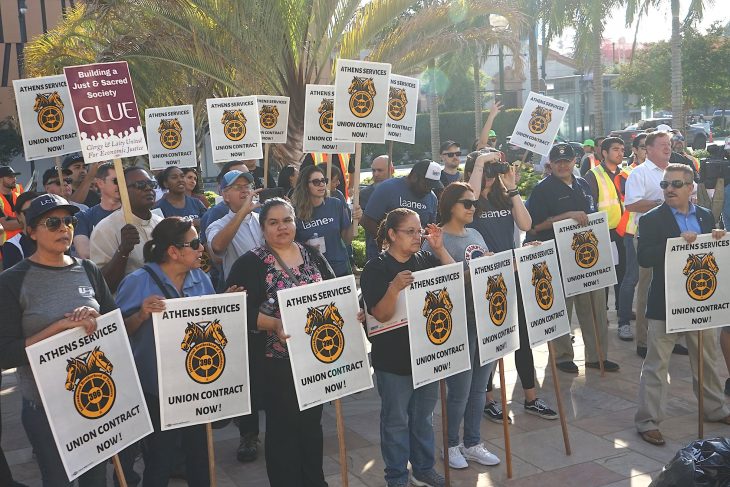 On Thursday, August 22, Teamsters Local 396 led a march in the City if Beverly Hills that included sanitation workers employed by Athens Environmental Services, hundreds of community residents, and members of the labor, environmental, and faith communities to support Athens sanitation workers. Workers showed Athens that they will keep fighting until they get a fair contract! Athens Environmental Services, the exclusive commercial waste hauler for all businesses and multi-family complexes in Beverly Hills, is denying its workers dignity, respect, and a voice on the job. Because of the vital role that sanitation workers play in keeping the city clean, as well as helping the city achieve its environmental goals, community stakeholders rallied in support of these workers. On the evening of Thursday, August 22, community members joined workers in a march through the streets of Beverly Hills to highlight the low-road practices of Athens Environmental Services, who is refusing to give its workers what many in the industry already receive.

Sanitation workers serve on the frontlines of public health and environmental stewardship. Sanitation is an important job, and a dangerous one. The brave men and women who pick up the city’s trash work in the fifth most dangerous industry in the nation, more than firefighting, mining, and construction.  The workers at Athens Environmental are literally putting their lives on the line when they service the City of Beverly Hills.

Athens Environmental Services is a subsidiary of Athens Services, a large regional waste hauler servicing major cities throughout Los Angeles County. The company has come under recent scrutiny by the National Labor Relations

Board’s Office of the General Counsel, which is currently investigating the company on charges of unfair labor practices, including disciplining and firing workers for supporting the union and withdrawing a contract proposal that would have provided workers and their families with full family medical insurance.