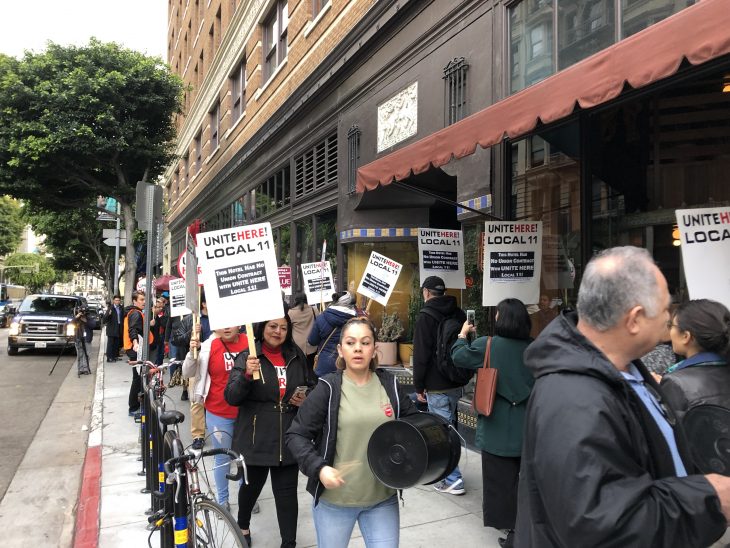 From Unite Here! Local 11: This week, the President of the Los Angeles City Council, Herb J. Wesson Jr, sent a letter to UK-based investment firm Queensgate Investment LLP expressing concerns about the future of Freehand Hotel’s workforce.  According public reports, Queengate is in the response of acquiring the trendy downtown hotel.

In the letter, dated July 30, 2019, Wesson observed that past changes in the corporate ownership or management of hotels have sometimes resulted in mass layoffs of hotel workers, as the hotel’s new owner or operator declined to retain existing workers. “Such mass layoffs,” Wessen stated, “harm not only the individual workers and their families who lose their livelihoods, but also place burdensome demands on the City and other local governments for social services to address the impacts of worker displacement and resulting unemployment.”

In light of these concerns, Wessen requested to that Queensgate commit to maintaining the current workforce in the event that the company assumes ownership of the property.

Additionally, Wessen noted allegations by employees that the current operator has failed to provide them with a dignified work environment and encouraged Queensgate to ensure workers are treated with respect.

Wessen stated: “These allegations include a pending lawsuit brought by a housekeeping employee alleging that she was made to clean men’s restrooms without an effective means of preventing male guests from entering and urinating in front of her and a pending Cal/OSHA complaint filed by another housekeeping employee alleging that he was made to clean up sewage water following overflows from a basement cistern without adequate training or protective equipment.”

This May, a housekeeping employee, Edith Gutu, filed a pending lawsuit against the hotel’s operator, Sydell Group, alleging she was the victim of sexual harassment, while another employee, Jose Santamaria, filed a pending complaint against the company with Cal/OSHA regarding safety issues concerning his handling of sewage water.

In addition to the allegations referenced in Wessen’s letter, the Freehand has been embroiled in a labor dispute since November 2018 when housekeeping workers requested that the company agree to fair process for choosing whether to unionize. The hotel has declined to agree to the workers’ request, which would entail adopting a position of neutrality vis-à-vis workers’ decision about unionization.