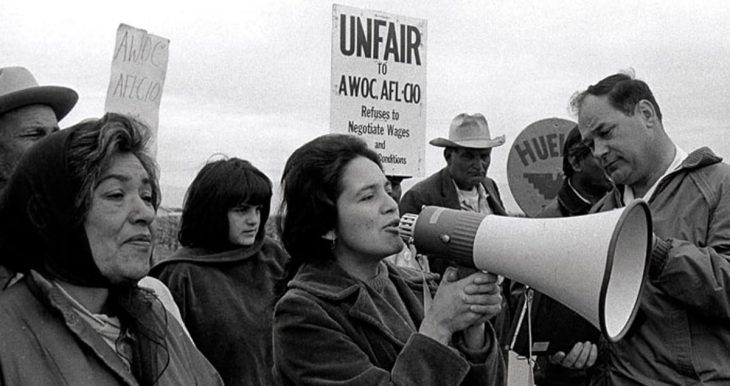 Dolores Huerta is a living legend in the labor movement. The recipient of the Presidential Medal of Freedom and the Eleanor Roosevelt Award for Human Rights, Huerta has been recognized over the years as a powerful force of change for workers who are often without a voice in the workplace.

In honor of Dolores Huerta Day, we have listed six accomplishments below that exemplify Huerta’s contributions to the labor movement.

1. She co-founded the Stockton chapter of the Community Service Organization (CSO) in 1955, which worked to improve the economic conditions for Hispanics.

2. In 1960, she co-founded the Agricultural Workers Association, which led voter registration drives and pushed for barrio improvements.

3. In 1962, along with Cesar Chavez, she founded the National Farm Workers Association (NFWA), which led to the formation of the United Farm Workers’ Union (UFW). She would serve as vice-president of the UFW until 1999.

4. She led the UFW national boycott during the Delano grape strike from 1965 to 1970. The strike would end with a ground-breaking three year contract for the workers.

5. In 1973, Huerta led another grape boycott, resulting in the California Agricultural Labor Relations Act of 1975. For the first time in U.S. history, farmworkers were given the legal right to collective bargaining.

6. In 2002, she created the Dolores Huerta Foundation, which pushes for, among other things, labor rights, immigrants rights, and civil rights.

To learn more about the Dolores Huerta Foundation, visit the foundation’s website here.