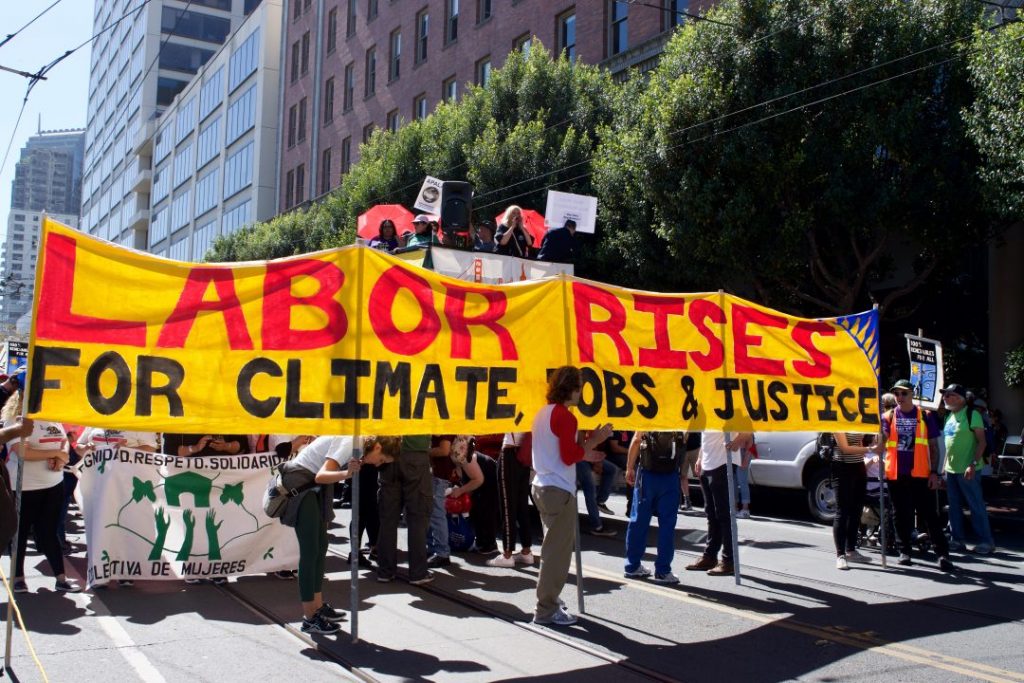 Representatives of the San Francisco Labor Council joined thousands of other demonstrators who marched from the Embarcadero Plaza to City Hall for the Labor will Rise, Climate Jobs & Justice event on September 8. The march was aimed at getting politicians to take bolder action regarding rising global temperatures and climate change.

The rear of the march was guarded by a Fire Engine driven by Local 786 San Francisco Fire Fighters to honor first responders who’ve been protecting local communities from destructive wildfires. Speaking at a press conference before the event, SFLC Executive Director Rudy Gonzalez emphasized the urgent need for immediate action on climate change.

“Fire fighters and electricians are on the front lines of battling wildfires and our members are also on the front lines of rebuilding communities after natural disasters,” Gonzalez said. “Working people have a strong voice on climate issues because it impacts working conditions, and they’re united in saying that we need to do more. We need to find ways to transition to ‘green power’ and maintain union standards to meet the needs of the local community.”

Gonzalez noted that the labor community has eagerly become involved in climate change issues in San Francisco because of the many natural disasters caused by warming temperatures in California. He cited the need for a citywide Project Labor Agreement to be passed in San Francisco to ensure a broad base of better labor policies for the future.

Labor had a strong presence at the march with many members carrying banners for their respective Locals. Ann Worth and Curt Gray, two members of Local 510 Sign & Display, came out to hold the banner for their Local’s contingent.

“My union endorsed this, so I came out to hold the banner and walk the march,” said Gray. “I showed up to represent my union and labor on this very important issue.”

“As a worker, addressing climate change is about survival,” added Worth.