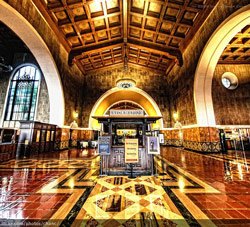 The holidays were over and it was time to ship my daughter back to college in Santa Barbara. She’d never been on a train before and her birthday is coming up soon, so I decided to book her a ticket online instead on Amtrak (unionized) as a gift. The round trip ticket cost me around $50 – which is a pretty good deal when you consider driving there and back would run me around 18 gallons of gas. At today’s insane prices that would have come to about $63, maybe more depending on where you buy (actually it shocks me every time I go to the pump. I look up at the price and think, “Really? REALLY?” Urgh.)

We decided to make a day of it and spend some time downtown before sending her off. We parked at Union Station and walked over to Olvera Street for a short stroll through, then I suggest lunch at the famous Phillipe’s restaurant. “One of LA’s most famous restaurants with the most delicious sandwiches in the area – and it’s union.”

She sighed. But I grabbed her hand and said, “Come on. You’ll see. We don’t have that much time before your train leaves.”

Phillipe’s is one of two Los Angeles restaurants laying claim to have invented the “French Dipped Sandwich” around 1918. Though I think the other restaurant officially was recognized as the originator of the French Dipped Sandwich, Phillipe’s isn’t buying it which is fine by me. I’ve had both and can confidently state that Phillipe’s sandwiches are better and cheaper. Must be the unionized staff as opposed to those non-unionized bums over at whoever-they-are.

My daughter, who had never been to Phillipe’s, perked up a bit when we reached it. Phillipe’s has its own wonderful smell and the place was bustling with activity. “This is cool!” she said as we walked in and she surveyed the dozens of historic photos lining the walls and the sawdust covered floors. The place reeked of Los Angeles history and between Olvera Street and Phillipe’s I was excited to introduce my daughter to them. These little adventures are the kind memories a person never forgets. No one goes to Olvera Street or Phillipe’s and then says years later, “Have I been there before?” Nope. You remember it… and they’re both unionized… and special as a result.

I ordered a lamb dip and my daughter ordered a “classic” beef French dipped.  We sat down and dove into our food, “Wow! This is GOOD!” she said, her eyes lighting up.

Looking over her shoulder I saw a giant picture on the wall of the old red car lines that used to dominate Los Angeles transit before they were bought by corporations from the Midwest, dismantled and replaced with the freeways—and traffic—that we know today as a mainstay of life in the L.A. Basin. Back then you could get almost anywhere easily be it the Valley, the beach, Downtown, Long Beach, Orange County or Riverside.

{Sigh.} Now we’re still trying to get back there in terms of mass transit. It’s a shame what the greed of big business can do to a community. Two of the most annoying aspects of living in Los Angeles?  Traffic and smog. And we’re now spending so much resources trying to re-engineer a solution to a problem created by interests outside of Los Angeles from 70 years ago. It’s frustrating, but at least the city and state are working on it instead of doing nothing.

I work a lot with the Building Trades unions and the 30/10 Initiative is supposed to unbramble this whole mess that Angelenos have been force to endure for decades. Simply put, it will build 30 years worth of mass transit lines in just 10 years creating 160,000 new jobs for Los Angeles County. Sure, we’ll have to endure a decade before this is completed, but it’s another example of our recently villianized government working hard to create manageable solutions to problems created by the greed-driven interests of capital. I get that. I wish more people did, too.

We finished our sandwiches and began the walk over to the palm tree-ringed Union Station. If you haven’t been to Union Station, you should and not only because the name is awesome. (Go Union!) It’s another unionized iconic Los Angeles building. The outside is beautiful, but the inside is amazing! It opens up like a cathedral with awe-inspiring ornate floors that are immaculately maintained. The place is simply gorgeous. It feels more like visiting a museum instead of the almost prison-like feeling of getting through a modern American airport. Looking up at the giant wooden chandeliers, I could hear the sounds of birds chirping. There must have been a dozen birds flying about the top of the cavernous entry way. It created a magical feeling that I’m sure was a real pain in the butt for the maintenance crew when all was said and done.

Unlike the airport, I could accompany my daughter to the train itself as we prattled on about how fun it was having her home for the holidays. It was nice. The train arrived on time, we exchanged hugs and I got to experience her signature rolling of the eyes as I told her to be careful and then she was off.

It can be bittersweet watching your children grow up. It’s a beautiful thing, but it’s not always easy. Today my daughter and I had fun together—a good memory for us both. Again, it reminded me that some of the best experiences in LA are union. Thanks to LA’s 800,000 union members for making that happen.