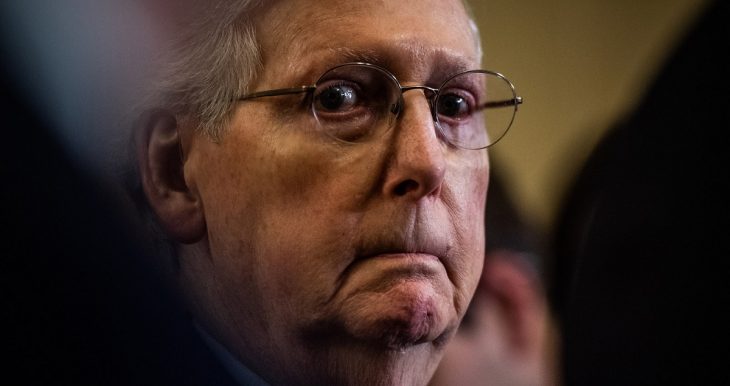 Today’s trade deal between House Democrats and President Donald Trump won’t see the light of day until after an impeachment trial, according to the Senate Majority Leader.

‘We will not be doing USMCA in the Senate between now and next week,’ the Republican from Kentucky said at a news conference on Capitol Hill. ‘That will happen, in all likelihood, right after the trial is finished in the Senate.’
McConnell also said the renegotiated trade pact is “not as good as I’d hoped,” differing with White House press secretary Stephanie Grisham, who said in a statement around the same time that the final version of USMCA is the ‘biggest and best trade agreement in the history of the world.’
His comments came after House Democrats announced they had struck a deal with the White House to advance the trade agreement after months of negotiations over key issues, including enforcement mechanisms and standards for labor and environmental protections. A spokesperson for House Speaker Nancy Pelosi pushed back on McConnell’s timeline, noting that in 2011 both the House and Senate voted to approve three trade agreements on the same day.
‘Senator McConnell has no excuse not to bring up the USMCA,’ Pelosi’s spokesperson said.
Democratic leaders plan to hold a vote on the USMCA in the House next week, according to House Ways and Means chairman Richard Neal, and the agreement is expected to pass with bipartisan support.”
For the rest of the story, visit CNN here.