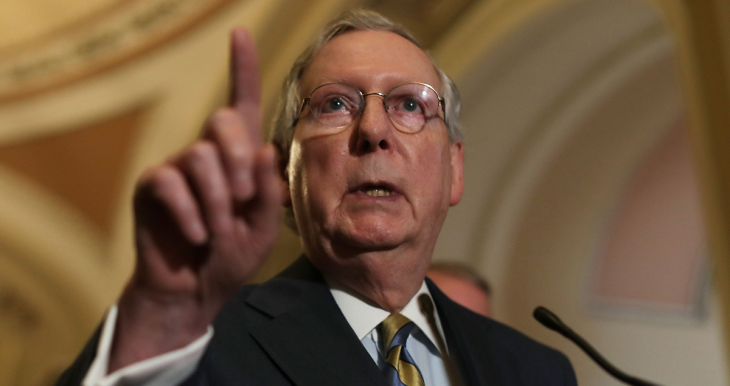 Republicans promised that the tax cuts wouldn’t add to the deficit. It appears that they were, predictably, very wrong.

“Nearly a year ago, as the debate over Republican tax breaks for the wealthy was near its end, Senate Majority Leader Mitch McConnell (R-Ky.) insisted that the tax cuts didn’t need to be paid for – because they’d pay for themselves.

Whether the GOP leader actually believed his own rhetoric is an open question, but either way, we now know the Kentucky senator’s claim was spectacularly wrong. The Republican tax breaks have, as Democrats and those familiar with arithmetic predicted, sent the nation’s budget deficit soaring.

Take a wild guess what McConnell told Bloomberg News he wants to do about it.

Senate Majority Leader Mitch McConnell on Tuesday blamed rising federal deficits and debt on a bipartisan unwillingness to contain spending on Medicare, Medicaid and Social Security, and said he sees little chance of a major deficit reduction deal while Republicans control Congress and the White House.

‘It’s disappointing but it’s not a Republican problem,’ McConnell said in an interview with Bloomberg News when asked about the rising deficits and debt. ‘It’s a bipartisan problem: Unwillingness to address the real drivers of the debt by doing anything to adjust those programs to the demographics of America in the future.’

He added that he believes ‘Medicare, Social Security and Medicaid’ funding constitutes ‘the real driver of the debt.’

Before we get into the broader implications of McConnell’s argument, it’s important to understand that we already know it’s the Republicans’ tax breaks for the rich that have made the deficit vastly larger. When McConnell calls the increased federal borrowing ‘very disturbing,’ as he did this morning, it’s like watching an arsonist wring his hands over the ashes he created.

The Senate GOP leader helped create this mess; he hasn’t earned the right to complain about it.”

For the rest of the story, visit MSNBC here.