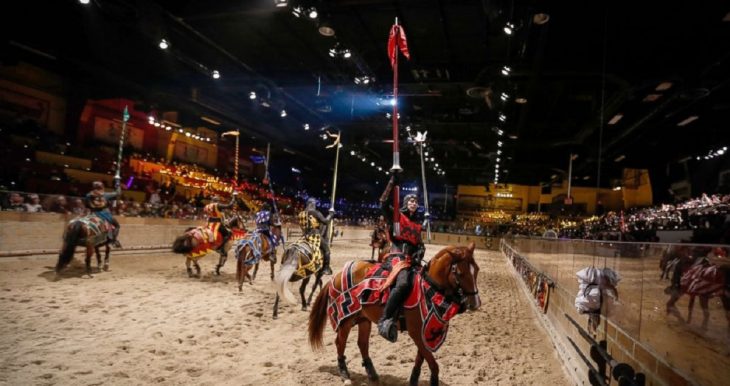 There were no unions in medieval times, so should there be unions at Medieval Times? Of course there should be. But the company is spending thousands a day on a union-buster to try to stop that from happening.

“Working at the famous dinner-theater chain Medieval Times comes with some unique occupational hazards. For instance, sometimes a guest who has emptied one too many goblets of booze starts banging the Middle Ages-style plates and bowls together.

Clanging the heavy dinnerware can spook the horses in the arena, endangering the knights as they joust for the queen’s honor. It often falls to the queen herself — a mic’d-up actor on a throne above the pit — or her chancellor, Lord Cedric, to gently admonish the overzealous crowd, all while keeping in character: Please, m’lord, don’t bang the plates.

‘You can hear it backstage sometimes, it’s so loud,’ said Purnell Thompson, a stablehand at the Lyndhurst, New Jersey, location. ‘We’ve had people thrown off their horses from the horses getting spooked. There’s only so much you can do to keep them under control at that point.’

Safety concerns are a big reason Thompson and other Medieval Times employees in Lyndhurst are trying to form the chain’s first union, workers told HuffPost. They have been organizing their location with the American Guild of Variety Artists, an AFL-CIO union that represents performers at theaters, theme parks and touring shows, including the Radio City Rockettes and entertainers at Disneyland.

The knights, squires, show cast and stablehands of Lyndhurst will vote July 15 on whether or not to unionize under an election overseen by the National Labor Relations Board. Around 40 workers would be included in the union. (Food and administrative workers appear to be employed under a separate corporate entity and would not be part of the bargaining unit.)

Medieval Times, which did not respond to interview requests for this story, has opposed the union campaign. Labor Department records show the company retained a union-avoidance consultant at the cost of $3,200 per day, plus expenses, to sway workers against the union. Employees said several anti-union confabs have been held on rehearsal days at the castle.

The consultant might have his work cut out for him. Medieval Times’ performers include trained actors and musicians who’ve been members of other entertainment unions, such as the Actors’ Equity Association or SAG-AFTRA, and already understand the role collective bargaining plays in their industry.”