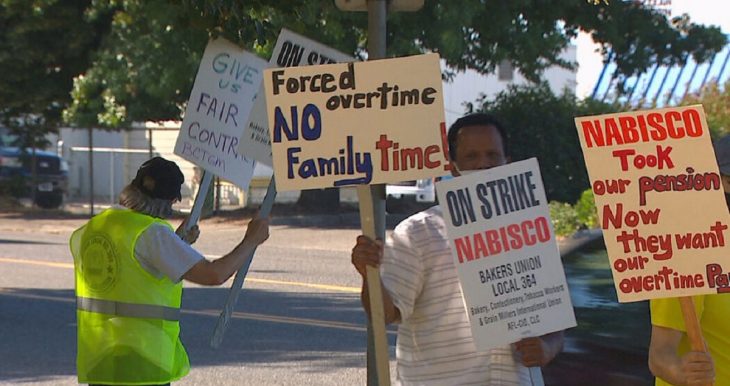 Fed-up Nabisco workers have gone on strike in several states.

“Nabisco workers in five states are on strike over changes to work schedules and overtime being sought by the maker of Oreos, Ritz Crackers, Chips Ahoy! and other popular snack foods.

The walkout began on Aug. 10 at a biscuit bakery in Portland, Ore., and has since swelled to about 1,000 workers in Aurora, Colo., Richmond, Chicago and, as of Monday, a distribution center in Norcross, Ga. They are represented by the Bakery, Confectionery, Tobacco Workers and Grain Millers International Union (BCTGM), which earlier this summer was involved in a 19-day strike at a Frito-Lay plant in Kansas.

Nabisco’s Chicago-based parent, Mondelez International, continues to produce snacks with nonunion staff even though three of its four U.S. bakeries have been affected by the strike. Unionized workers in all five states are governed by a single contract that expired in May.

Union leaders say Nabisco is trying to squeeze more hours out of its staff while paying less overtime, even as some workers are taking 16-hour shifts to help meet a pandemic-fueled surge in snack food sales. They also are raising concerns over two recent factory closures in Georgia and New Jersey, which the union says is part of a broader campaign to move low-wage work to Mexico. And they’re calling on the company to restore their pensions, which were supplanted by a 401(k) plan three years ago.

Workers ‘are telling Nabisco to put an end to the outsourcing of jobs to Mexico and get off the ridiculous demand for contract concessions at a time when the company is making record profits,’ BCTGM president Anthony Shelton said in a statement.”