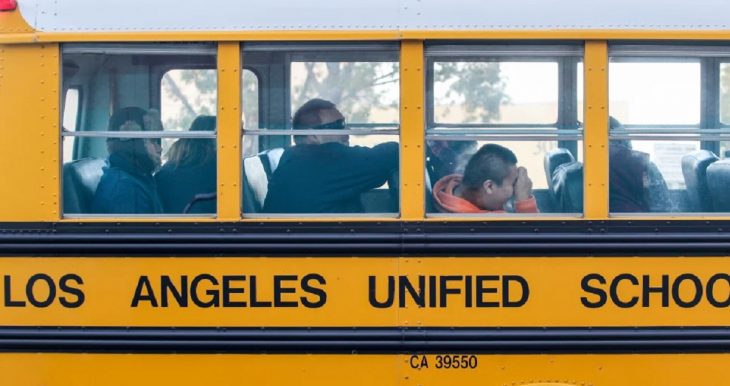 Los Angeles schools are starting off the year virtually as coronavirus cases surge.

“Los Angeles campuses will not reopen for classes on Aug. 18, and the nation’s second-largest school system will continue with online learning until further notice, because of the worsening coronavirus surge, Supt. Austin Beutner announced Monday.

The difficult decision became unavoidable in recent weeks, Beutner said, as coronavirus cases have skyrocketed in Los Angeles County, and the district cannot come close to protecting the health and safety of some half a million K-12 students and about 75,000 employees . . .

In California, day by day, more school systems are choosing to keep campuses closed and reopen online only as health officials sound the alarm about the rising number of coronavirus cases.

In Northern California those districts include West Contra Costa County, East Side Union in San Jose and the Oakland Unified School District.

In Southern California, the San Bernardino City school system cited the ‘recent and significant rise in COVID cases in our community’ in its July 2 announcement that campuses would not be reopen next month.

‘After the beginning of the school year and if and only when we can do so safely, we will begin to offer, in-person check-in and support services for small groups of students and eventually transition to a hybrid or blended learning model,’ said interim Supt. Harold Vollkommer in a statement.

In L.A. County, recorded infections were reaching new daily highs and the infection rate of those tested rose to 10%. It had fallen to 4.6% in May . . .

[T]he recent hope had been that L.A. Unified and other school systems could open for most families using a hybrid schedule, in which students would attend classes part time on campus in small socially distanced groups, using a staggered schedule. They were going to combine this limited on-campus time with an enhanced study-at-home framework that included academic work online and offline.

Some school districts still have been planning to go that route, but San Diego Unified, which was one of them, announced Monday morning that it, too, would be online-only for the start of the semester. In that school system, the teachers union had pushed back in recent days against reopening plans, dissatisfied with safety measures.

The teachers union in L.A. was more adamant. Last week, the leadership called for campuses to remain closed. And 83% of teachers agreed in a one-day snap poll; about 56% of union members participated in that survey.

But even a staggered, limited on-campus schedule would fall short of demands from President Trump and U.S. Secretary of Education Betsy DeVos. They have threatened to withhold federal funds from school districts that don’t open campuses — although it isn’t clear that Trump would be able to carry out that threat.

Those siding with Trump include Florida Republican Gov. Rick DeSantis, who also has threatened the funding of school districts that don’t reopen campuses — despite a huge rise in that state’s infections and infection rates. About 90% of school funding comes from state or local sources.”