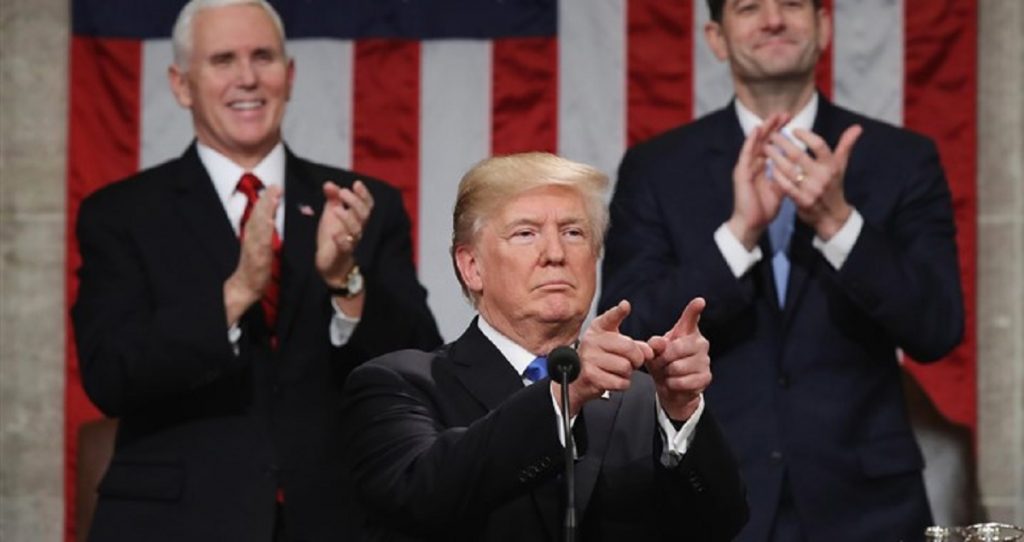 Republicans and the president championed their tax cuts on the promise that workers would benefit greatly. It turns out that promise was empty.

“President Donald Trump’s corporate tax cuts might not have trickled down to American workers in the way that he suggested they would.

Trump and Republican leadership have long touted their tax cuts as a massive boon to America’s working class, if not through direct tax reductions or refunds, then through the trickle-down effect of bonuses and wage increases from their employers who receive massive corporate cuts. ‘Tax reform is working,’ Republican House Speaker Paul Ryan said in January, mentioning Apple’s decision to reward a bonus of $2,500 in stock grants to some Apple employees. ‘Workers are coming home and telling their families they got a bonus, or they got a raise or they got better benefits.’

President Donald Trump flanked by daughter Ivanka Trump and Treasury Secretary Steven Mnuchin speaks during a tour of the H&K Equipment Company in Coraopolis, Pennsylvania, on January 18. President Donald Trump’s corporate tax cuts might not have trickled down to American workers in the way that he suggested they would.

But a new analysis of all Fortune 500 companies found only 4.3 percent of workers will receive a one-time bonus or wage increase tied to the business tax cuts, while businesses received nine times more in cuts than what they passed on to their workers, according to Americans for Tax Fairness, a political advocacy group devoted to tax reform. The analysis also found that companies spent 37 times as much on stock buybacks than they did on bonuses and increased wages for workers.

The study looked at corporate data, news reports and independent analyses of the top companies in the United States, which represent more than two-thirds of the gross domestic product, and analyzed changes in wages and share buybacks since the announcement of the Republican tax plan in December.

‘There are too many disingenuous claims that the Trump and Republican tax cuts for corporations will trickle down to the middle class,’ said Frank Clemente, executive director of Americans for Tax Fairness. ‘President Trump and Republicans gave huge tax cuts to big drug companies, big oil and other corporations, but corporations are giving back little—if anything—to working families,’ said Clemente. ‘In fact, this [analysis shows] that 433 corporations out of the Fortune 500 have announced no plans to share their tax cuts with employees.’

The newest projections by the nonpartisan Congressional Budget Office found that the Republican tax plan led to, in part, a 2018 deficit $242 billion higher than previously estimated.”

For the rest of the story, visit Newsweek.