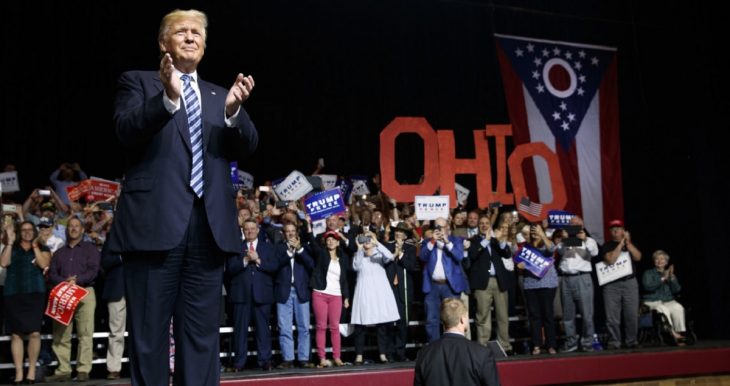 Workers in Ohio, a state that went for Trump in 2016, are speaking up on his promise to bring good jobs to the state.

“Voters in industrial northeast Ohio have not forgotten a particular promise President Donald Trump made when he visited the region soon after taking office. Manufacturing jobs are ‘all coming back,’ Trump said. ‘Don’t move. Don’t sell your house.’

‘He lied,’ said Trish Amato, who worked at a General Motors plant in the area that stopped production earlier this year. ‘He told everybody it’s all coming back,’ said Amato. ‘It’s not. It’s harder and harder to find a job.’

Amato, who voted for Trump in 2016 but is having misgivings about supporting him next year, is one of hundreds of workers at the Lordstown plant who lost their jobs, and in many cases sold their homes and left the region, since Trump’s speech in Youngstown in mid-2017.

Trump’s economic promises helped him carry Ohio in 2016, and the economy will be a major factor in next year’s presidential race. But as voters in this critical swing state state turn their attention to the 2020 election, many say they’re increasingly frustrated with Trump’s record on economic issues, including his trade policy and attacks on organized labor.

The unemployment rate in Ohio has dropped from 5.2 percent when Trump took office to 4.1 percent in August, according to the state’s latest labor statistics, mirroring the national trend. The manufacturing, mining and construction sectors all added jobs initially under Trump. But growth has slowed this year in the type of blue-collar industries Trump championed as a candidate, and his trade war with China has created growing business uncertainty in the agriculture sector, which has long powered Ohio’s economy.”