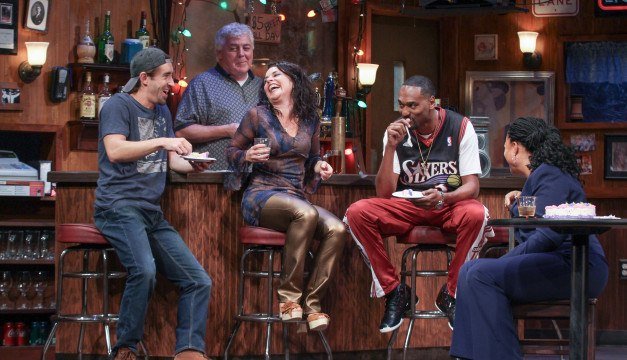 As she began programing her first season as Producing Artistic Director of the Philadelphia Theatre Company (PTC), Paige Price’s opener was, to some extent, an easy choice.

Lynn Nottage’s Pulitzer Prize-winning play “Sweat” was the no-brainer selection to launch the 2018-19 season. Following its Broadway run, the play has become a hot property, with productions springing up at regional theaters all over the country.  Indeed, PTC’s director Justin Emeka missed the October 17 opening night of his production in Philadelphia because he was already across the state helming a new production for the Pittsburgh Public Theater.

“Sweat” chronicles the effects of the recession on a downsizing factory. Lifelong friends Cynthia and Tracey – coworkers on the assembly line – see their relationship tested. Their sons also experience fallout, as does the Columbianbusboy at the local bar who is looking to work at the factory. The play is set in Reading, Pennsylvania and is based on Nottage’s interviews with people in the city which, at the time of her research, was one of the poorest cities in America. PTC’s production is the play’s Pennsylvania premiere.

“’Sweat’ is about people I grew up with,” said Price, a native of Middlesex, New Jersey. “Lynn wrote a brave play about real things. When you talk about the political climate that exists right now and what created it and the disaffected people that have been left behind, this is it.”

“I grew up in a very blue-collar town and I just remember how disconcerting it was living paycheck to paycheck, even my family,” she continued. “I think that taught me how much you have to take care of itself. I think it’s also why I got involved in my union when I became an actor, just keeping the radar out for fairness and justice. It was something that drove my moral compass, seeing that lack of stability for really hard-working people that couldn’t get ahead.”

Organized labor plays a significant part in “Sweat” and the November 1 performance will have a post show audience talkback featuring people offering perspectives from the labor community. It’s an audience that PTC is excited to reach. PTC’s cast and crew are union members as well.

As a longtime company rep and as the 1st Vice President of Actors’ Equity Association for many years, Price said her appreciation of what unions do runs deep.

“When I first started working, I didn’t really understand what the union offered,” Price said. “I had some experiences as a young performer that were unacceptable, and when I got into the union, I realized the whole mechanism by which a group of people who didn’t know each other and did the same work could be protected and could have guidelines for how to be a professional.”

As part of the rehearsal process, the cast and director Emeka visited Reading which sits in nearby Berks County, about an hour outside of Philadelphia. The company visited the bar that inspired “Sweat’s” setting and spoke to people in the community. PTC has also done community outreach with Reading in an effort to get people from Philly to explore Reading and vice versa.

The community had a familiarity to Emeka who moved around a lot as a child while his father served in the military.

“One of the helpful things about going to Reading was helping to put a human face on the community,” said Emeka. “The play can feel so tragic like there’s no hope. I always think it’s important to provide an audience with a sense of the possibility of redemption. So going to Reading and seeing that people were still smiling and laughing in the midst of their struggles was important. I didn’t want to get caught up in just the tragedy of the play.”

“Sweat” continues through November 4 at the Suzanne Roberts Theatre, For more information on “Sweat” and the November 1 talkback, click here. Union members can receive a 20% discount on all tickets purchased throughout the run. Use the promo code LABOR411. Purchase tickets here. 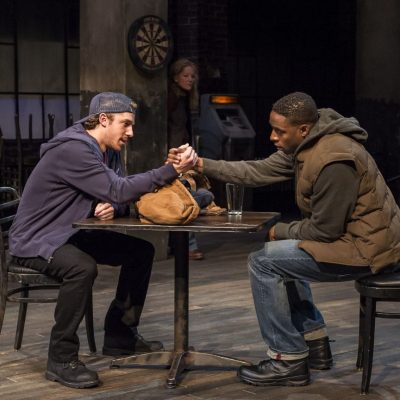