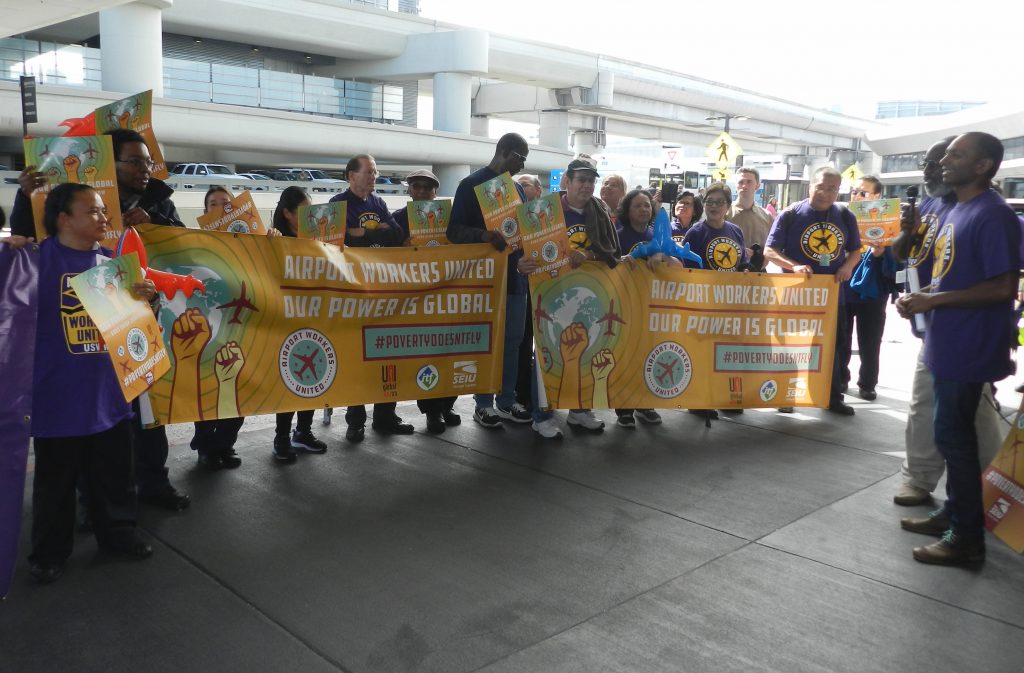 SEIU Airport Division Director Kevin Christensen said the rally was one of several held in California, and around the world, on a Global Day of Action for Airline Workers. “We are standing strong with workers across the globe who are standing together so they don’t have to work two jobs,” he said.

Many of the workers earn as little as $12 an hour and work two jobs to make ends meet in the San Francisco Bay Area. Some are covered by SFO’s Quality Standards Program that guarantees workers a minimum wage 50 cents above San Francisco’s minimum hourly wage of $14 set by the City’s Minimum Compensation Ordinance (MCO). The SF Board of Supervisors approved a $3 an hour increase in the MCO wage the day of the rally, a year after it was proposed.

“We finally got $17 an hour,” said SF Supervisor Jane Kim. “We are setting a standard for workers throughout the US.” Kim said winning the wage increase, “would not have happened without labor unions advocating and organizing so workers can live securely.”

“Many years ago, contracted workers at SFO organized to raise wages,” said SEIU-USWW Vice President Sanjay Garla. “Today is a milestone to celebrate the MCO increase. Three dollars an hour is important, but $17 and hour is not enough to live in the San Francisco Bay Area.” Garla said the next step for the union is to negotiate good contracts with the multi-national corporations who contract with the airlines to win health care for workers’ families, safer working conditions, and respect on the job

SEIU leaders and airline workers pointed out the minimum wage is not a living wage in the SF Bay Area, where housing costs have skyrocketed over the last few years. James Spencer, a fueler for Menses, said he had to take a second job and isn’t able to spend time with his family. He noted that airlines are making record profits, and that, “they should spread it around to everyone” who works to make the airlines profitable. United Airlines made $2 billion in profits last year as the airline industry as a whole made $38.4 billion.

Jayson Beslig, a cabin cleaner for ABM, said he and his wife both work two jobs. “We provide a huge service to the airlines and help make them profitable,” he said. “Enough with full time jobs that don’t pay living wages. No more not being able to spend time with our kids.” Beslig said the world’s airport workers globally “are united to win union rights in every country.”

Several Teamsters who work as mechanics for United Airlines rallied with the SEIU members.