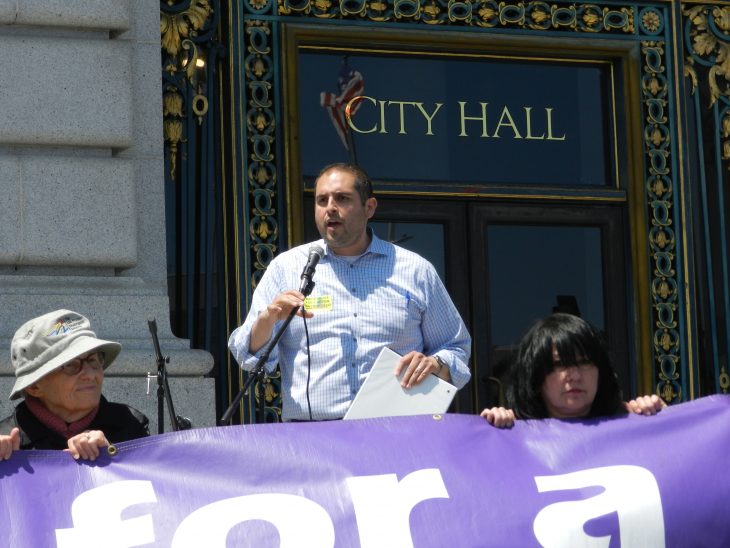 Members of Service Employees International Union (SEIU) Local 1021 and Office and Professional Employees International Union (OPEIU) Local 29 who work for non-profit agencies rallied at City Hall May 8 to call for further increases to the City’s Minimum Compensation rate. They were joined by representatives of the San Francisco Living Wage Coalition and San Francisco Labor Council.

The San Francisco Board of Supervisors approved a $3 an hour increase in the City’s Minimum Compensation Ordinance (MCO) wage for most low paid workers last October. The wage went from $14 an hour to $17 on January 1, 2019. The minimum wage for workers of nonprofits under contract with the City will increase by $1.50 to $16.50 on July 1, 2019. The minimum wage for home health care workers will increase in phases, reaching $18.75 on July 1, 2022.

“San Francisco passed amendments to the MCO last October to raise wages for employees of non-profits,” said San Francisco Living wage Coalition Chair Karl Kramer. “The best way to prevent a recession is to increase workers’ wages. We spend our earnings locally, which has a ripple effect to help the economy.”

San Francisco Labor Council (SFLC) Executive Director Rudy Gonzalez pointed out that the minimum wage sets the floor for earnings but is not a livable wage. He pointed out that $18 an hour is not enough to get by in a city with high housing and transportation costs. Even at $18.75 an hour, they will only be making $39,000 annually. “Can anyone afford to live in San Francisco earning even $25 an hour?” he asked. He said, according to economic studies, a worker needs to make at least $33 an hour to make ends meet.

Raising the MCO wage and enacting a citywide PLA have been priorities for the SFLC and the San Francisco Building and Cosntruction Trades Council.

Stanley Edwards, and OPEIU Local 29 member who works at a homeless shelter, said “We work on San Francisco’s biggest problem, homelessness. The work we are doing is helping improve the city.”

After the rally, workers attended the Board of Supervisors’ Budget and Finance Committee hearing that discussed priorities for the mayor’s budget and looked at increasing the minimum compensation ordinance for non-profit organizations. Several employees of non-profits spoke about the need to raise wages and bring equity to MCO so non-profits with City contracts and those without City contracts earn the same living wage. San Francisco contracts with 450 nonprofit organizations that work on homelessness, mental health services, youth and senior programs, affordable housing development, and other issues and programs. Supervisors discussed the need to make sure wages are high enough for agencies to retain good workers in the public sector.