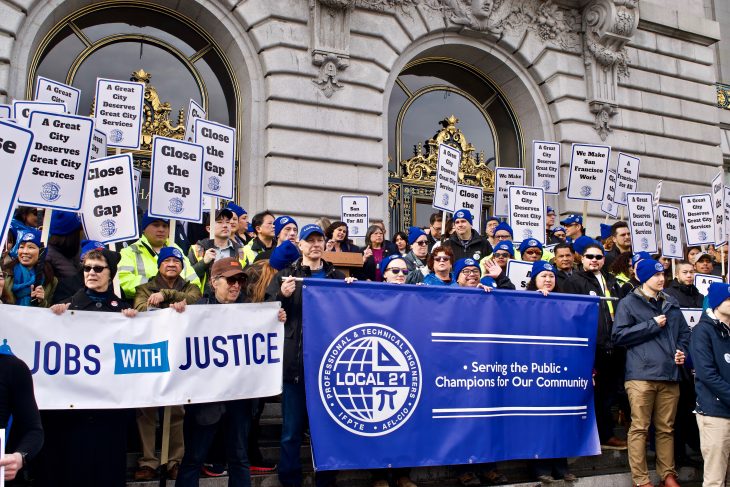 Hundreds poured onto the rain soaked steps of San Francisco’s City Hall on January 17 to kick-off International Federation of Professional and Technical Engineers Local 21’s collective bargaining with a spirited rally. Local 21 public service workers adorned with blue hats along with many others gathered to demand that the City and County of San Francisco close the widening wealth gap for them and all San Franciscans.

“While the City and County of San Francisco are often presented as a strong political voice on the issues of inequality that plague our national economy, it is failing to close the gap as our city’s largest employer,” said Gus Vallejo, IFPTE Local 21 President.  “The City is recouping hundreds of millions of unbudgeted dollars from the state, and its revenues have swelled by more than $3 billion since the recession, yet its employees are being driven out of the city by skyrocketing rents, stagnant wages, and increased outsourcing of what were once middle-class jobs.”

Supervisors Rafael Mandelman, Sandra Lee Fewer, Norman Yee, Gordon Mar, Vallie Brown, and Matt Haney spoke at the rally along with San Francisco Labor Council president Rudy Gonzalez and several Local 21 leaders. The refrain throughout the larger-than-expected gathering was that the City’s workers keep San Francisco afloat, and when they suffer the whole community fails to thrive. “We have to make sure that no one who works for the City gets pushed out of the city because they can’t afford to be here,” said Haney.

“Often times the work you do goes unseen,” Gonzalez told the crowd. “Well, we see it and we believe in it and we value your work because we know that your work is a commitment to the public good. It’s a commitment to our communities, not to a bottom line or a profit margin.”