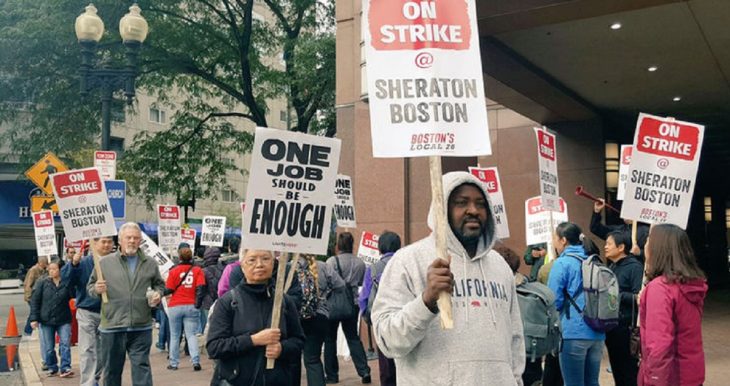 Marc Normandin of SB Nation has penned an excellent piece, asking unionized athletes to honor picket lines – and calling out the ones who haven’t.

“It should have been an easy opportunity to show solidarity. It should have been a friendly, comradely way to unite against oppressive bosses. Instead, professional athletes from the various North American sports unions have, again and again, put themselves ahead of the striking Marriott hotel workers, and crossed the picket lines that were put up in early October 2018. As if these hotel workers didn’t already have enough of an uphill battle ahead of them against the world’s largest hotel company, they now have to contend with athletes and sports unions ignoring their fight.

That has to stop.

First, it was MLB’s New York Yankees, arriving in Boston, Massachusetts for the start of the American League Division Series against the Red Sox on Oct. 4. They stayed at the Ritz-Carlton— their usual lodgings — rather than changing to one of the many hotels in the city where workers were not on strike and that were suggested by UNITE HERE, the union leading the strike, as alternatives [Disclosure: I’ve donated to UNITE HERE Local 26’s strike fund]. When SB Nation asked the Major League Baseball Players Association for comment, we were told, “From what we understand, these workers have been trying to negotiate a fair contract for more than six months. They deserve to be heard and deserve our support.” Granted, the Yankees crossing the picket line did help the striking hotel workers get press, but it certainly was not due to support from the visiting team from the Bronx nor from the MLBPA.

Imagine how much more powerful a show of support the MLBPA and the Yankees could have made by posing for photographs with the striking workers from Local 26 before heading to their new hotel full of employees who weren’t fighting against a corporate behemoth? Imagine if the MLBPA had arranged for Red Sox players to join the Yankees for this moment, too: two historic rivals, about to face off in a playoff series, but not so antagonistic that they would allow it to get in the way of showing solidarity with fellow union workers? A video of Red Sox and Yankees players chanting the workers’ slogan, “One job should be enough,” holding up signs in support of their fight for better wages, protections against sexual harassment, and improved working conditions in general for what is a strenuous, taxing job that doesn’t pay workers enough to live in the expensive cities the hotels are located in. Sadly, imagining is all we can do.

One of the reasons the West Virginia teacher strikes worked this year — and helped to inspire teachers strikes elsewhere across America — is that the teachers showed incredible solidarity both in their organizing and in their demands. The teachers didn’t just go on strike for wages that improved on their dismal ones: they also fought until all West Virginia state employees received a raise better than what elected officials had managed to procure for them in previous decades, better health care, and long overdue improvements to the schools themselves. They fought for a better community — not just themselves, not just in a vacuum.

The Yankees had a chance to rally national support for the hotel workers by showing some themselves. But, the team didn’t fight in solidarity, or at all. Afterward, the MLBPA sent out a brief statement that lacked an apology for crossing a picket line, with a vague notion of support for the workers included.

When the Houston Astros showed up in Boston for the American League Championship Series later in October, they did change their hotel accommodations to avoid crossing the picket line — an improvement, to be sure. The Los Angeles Dodgers did no such thing for the World Series, however. Unlike with the Yankees, where it could be argued that news of the strike was sprung upon them too late to change their reservations, this was a conscious decision by all involved.

According to UNITE HERE, the Dodgers did explore changing hotels to avoid crossing the picket line, but ultimately stayed in a Marriott property anyway. The reason? There weren’t enough suites in the alternative hotel options, and player contracts require suites.”

For the rest of Normandin’s piece – and it is definitely worth a read – check it out in its entirety at SB Nation here.