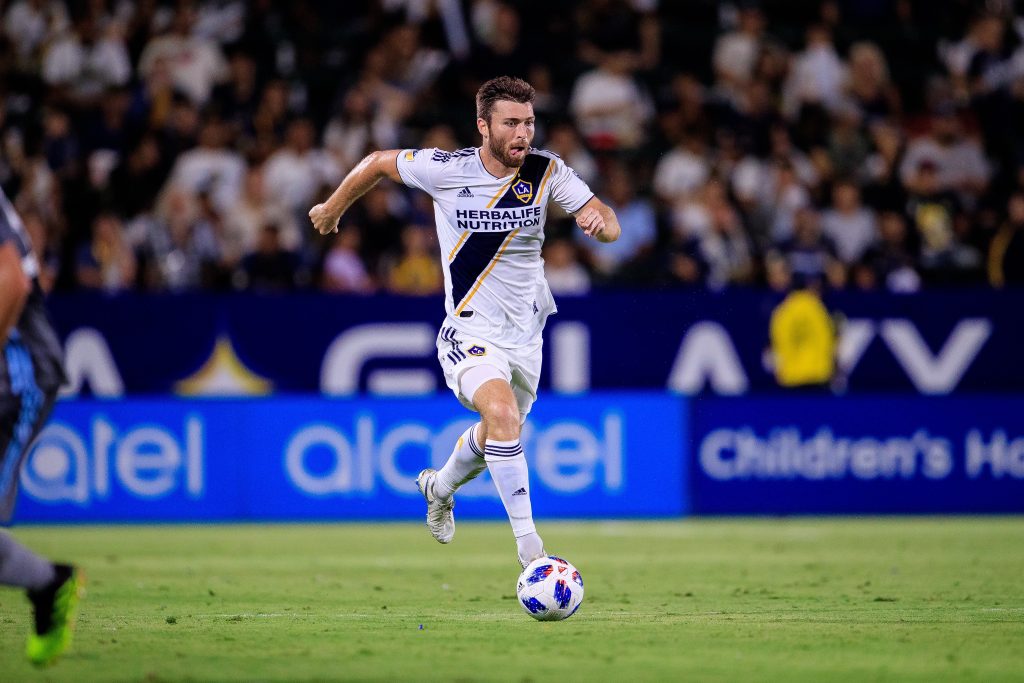 September 29 is Union Night at the StubHub Center as the Los Angeles Galaxy face the Vancouver Whitecaps. Tickets include a free Union Night scarf. For tickets, click here.

The composition of the players in Major League Soccer is as diverse and wide-ranging as the sport itself, with players taking vastly different paths into the league and earning a wide spectrum of salaries..

When he was voted in as a young player representative for the L.A. Galaxy, Dave Romney knew he was being enlisted as much for his youth as for his savvy and ability to ask questions.

“Most of the players who are in the MLSPA are veteran US player who have been in league for awhile,” said Romney, a defender who joined the team in 2015. “There are not as many international guys and not as many young guys. The league is extremely diverse, but the Players Union isn’t as diverse and one way to start increasing that diversity was with young players. That’s how I got in initially.”

A native of Irvine, CA, Romney played for the Irvine Strikers and eventually studied finance at the University of San Francisco where he also played soccer for four years. After graduation, he joined the L.A. Galaxy II, and was signed by the Galaxy in August of 2015.

Labor 411: Can you talk about some of your responsibilities interfacing between the MLSPA and the Galaxy

David Romney: Director of Player Relations Ty Harden is the main contact between the union and each team and he always contacts us with updates about where they are in negotiations or the things they’re fighting for and the steps we can take as a union to solidify our approach in order to get the best deal possible for all the players. David Bingham and I will listen in on the conference calls and all the changes they’re discussing, whether it’s the budget or any of the numerous issues, and then we report back to our team and get their opinion to see what they want to do. We’ll take the temperature of the room and report it back to Ty Harden so they can have a feeling of how every team is.

Labor 411: Could players on different teams have different priorities?

DR: Lots of teams are built differently. Our team, the L.A. Galaxy has a lot more international players. We have guys making a lot more money so we’re going to have different opinions on certain rules than, say, a team in Philadelphia which has a lot of young guys making the minimum salary. David and I are basically the bridge between what our team wants and the guys in New York.

Labor 411: You were voted in as the Galaxy’s young player rep. What made you want to take on this role?

DR: It’s intellectually stimulating. I majored in finance and I was going to go into finance after college, but soccer kind of took off, so it was something to keep active while I’m playing. I don’t really have time for any part-time job in finance or real estate. This is something to be involved in and it’s nice to be able to put my input into league decisions. I don’t have a ton of influence, but hopefully I’m asking the right questions to get them thinking about certain things that I think would benefit the league in the long run. I like standing up for the smaller guy in the league. I like being a player who is sought after on the team to ask questions.

Labor 411: Can you give me an example of a recent issue that has been of concern to the union?

DR: One of the biggest issues we’ve seen recently is the addition of targeted allocation money (TAM). We agreed on a collected bargaining agreement in 2015 in which we had an agreed upon salary cap. After we signed that agreement, the league started pumping millions into this TAM budget and said you can only use it on players who are new to this league. Most of the players who are new to the league are international. So you’re seeing a huge discrepancy in salaries between new international players and people who are currently in the league. You’ll have guys of equal talent and one is making $150,000 and one of these new TAM guys is making $750,000. So one of the things we’ll be fighting for in the new CBA is freeing up as much this money as possible to the entire player pool, and not just the TAM guys.

Labor 411: What was your reaction when you learned that the Galaxy would be hosting a Union Night promotion?

DR: I was kind of shocked when I heard about it.  At first I thought it might have been for us, and I thought, ‘That’s kind of weird.” It does make a lot of sense that it could be for other people in all these different fields who are Galaxy fans who are possibly in a union, and they may be represented for doing extra stuff out of their work. It’s nice to be acknowledged.

DR: I just want to thank other people for participating in their unions. They work a lot more hours than we do and they’re a lot busier and probably have to handle families and other responsibilities, and they’re still putting in their time and work to help their fellow employees.