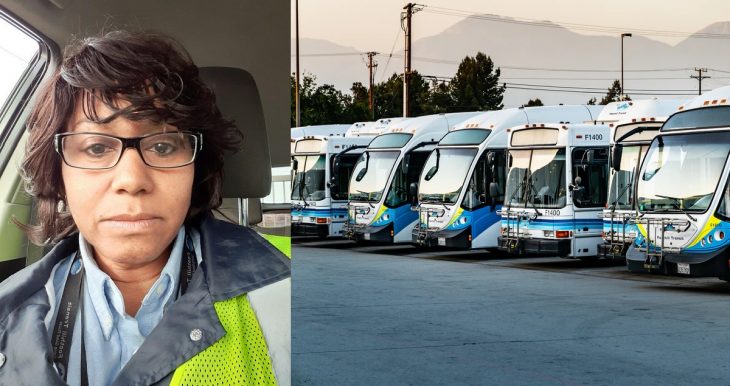 No PPE for Drivers, But Co. Requires Masks for Anyone Entering its Corporate Office

With over 200 public transit worker deaths across the country from COVID-19, and hundreds more who have fallen ill, there’s no question the deadly pandemic has wreaked havoc on front line workers in the bus industry. Yet despite the evidence, some employers are failing to protect workers – with protective draping, PPE, or even rules limiting a driver’s ability to enforce passengers to wear masks.

Keolis Transit America, a national company which operates the bus system for Foothill Transit in Los Angeles County, not only is putting its drivers in harm’s way, but actually fired an immunocompromised driver last week after she refused to allow a mask-less passenger to board her bus.

“I’m still under a doctor’s care,” said Kessel Davis, who just returned to work in May following breast cancer surgery. “I have to be really careful for my health.” Kessel, who had worked for the agency for the past three years, said the company told her, “We don’t pay you to enforce the rules, just drive the bus.”

“I don’t sleep at night since I was fired,” she said. “They’re asking us to risk our lives to drive passengers.”

In a memo sent to drivers last week, Keolis reinforced that message, directing drivers to allow passengers without face masks to board buses, despite state law:

“This memorandum is to remind all of our employees that everybody in Los Angeles County must use a face covering when in public or around people from other households. However, the enforcement of this mandate is not the driver’s responsibility. Foothill Transit has directed both contractors that ‘we will not deny service to customers without a face covering’ or not wearing the face covering correctly.”

The company fired driver Kessel Davis after she called dispatch about the problem passenger who refused to put on his mark before boarding her bus. Kessel said she took the action to protect herself and everyone on her bus.

Kessel says that very few of the busses in her yard — maybe 10 out of the 200 buses — have partitions separating drivers from the passengers. She did note that while buses have been outfitted with chains to separate drivers from passengers, oftentimes passengers simply bypass the chains.

Of the 250 drivers in her yard, she believes that at least four of them and one manager have contracted COVID-19. Incredibly, the company still refuses to provide proper PPE to drivers, leaving them to buy their own masks.

Secretary-Treasurer, Eric Tate, of Teamsters Local 848, which represents Davis and other drivers, says that Keolis is behaving recklessly and hypocritically. “Keolis won’t even allow anyone to come into their headquarters with a mask; but they’re asking our bus drivers to pick up belligerent passengers who aren’t cooperating.”

He notes that many passengers still stand too close to drivers, sometimes coughing on them, all while not wearing masks. “The company isn’t backing up our drivers. It’s doing the opposite: telling them that they cannot refuse to pick up a passenger who isn’t wearing a mask. They’re asking us to put our members at risk because of these unfair policies.”

Local 848 has had its struggles with COVID-19. “I have more than 30 members who have contracted the disease – a few so seriously that they may never be able to driver again. At least one member in the Local has died, which was a bus driver. Other locals in the area have also lost drivers to COVID, so there is reason for us to be alarmed.”

The local is grieving the termination.

The disputes with Keolis are gaining momentum outside California as well. In nearby Nevada, the Teamsters are suing the company for failing to abide by the governor’s face mask mandate.
Gary Watson, President of Teamsters Local 533 in Reno, NV, says, “Our patience [with Keolis] evaporated when we learned that a passenger was refused boarding because his pants were down but maskless passengers were allowed on the bus.”