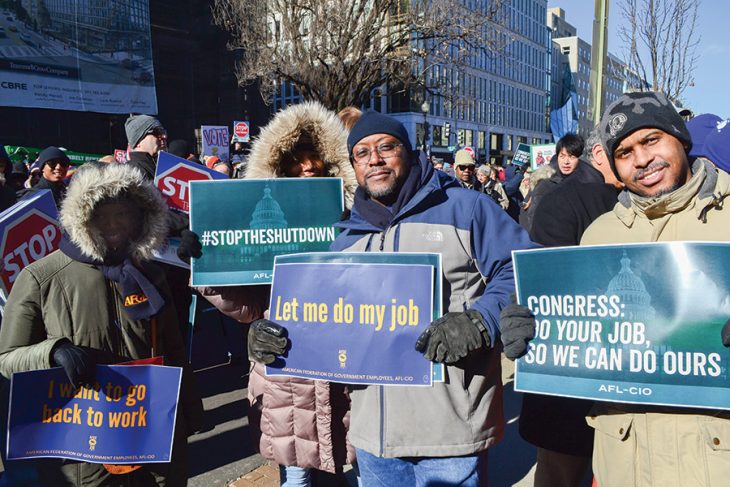 The longest federal government shutdown in U.S. history is over, but for many workers the fallout continues. During those 35 days, 800,000 government workers were either blocked from doing their jobs or forced to work without pay.

“From the civil servants locked out of their jobs at agencies like the EPA, CDC, and HUD, to the women and men who risked their lives safeguarding our prisons, airports, and borders without pay, to communities hurt by the shutdown as transit systems lost fares, local restaurants and businesses lost customers, landlords weren’t paid rent, and banks had to accommodate federal workers who couldn’t pay their loans or mortgages — this shutdown hurt everyone,” said J. David Cox Sr., national president of the American Federation of Government Employees.

Cox explained that the harm done to federal workers ultimately resulted in harm done to taxpayers due to workers’ loss of morale. From rationing prescription medications to sleeping in cars to save gas, the turmoil inflicted upon government workers translated into many workers calling in “sick” to days of unpaid work.

According to a survey on how the shutdown affected the finances of workers conducted by Prudential, nearly half of respondents fell behind on their bills during the 35-day period, including over a quarter that missed a rent or mortgage payment. Most spent all their emergency savings. The survey also found that 80 percent experienced high levels of stress.

“The president and his administration claimed the purpose of this shutdown was to help the country and increase security, but it cost the economy $11 billion and put undue stress on the workers who keep us safe and provide critical services to the American people,” Cox said. “And then, after the government reopened, thousands of workers nationwide continued to miss paychecks or received incomplete pay for weeks of service.”

“We hope that the president learned his lesson and will work with Congress between now and September to make sure that no one has to suffer through another disastrous government shutdown,” Cox said.