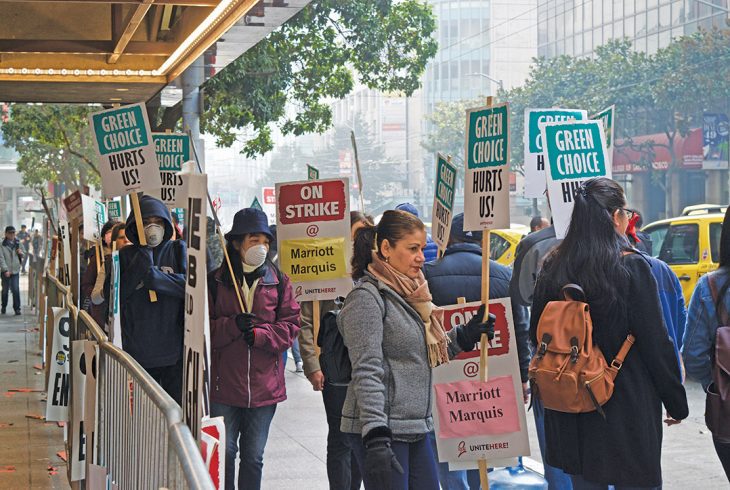 With a nearly two-month long strike in the rear view mirror, 2,500 of San Francisco’s hotel workers, members of UNITE HERE! Local 2, have emerged with higher wages and better working conditions.

These workers and their allies fought Marriott International, one of the richest and largest hotels in existence, and won a contract settlement that includes an incremental wage increase of eventually $4 per hour for housekeepers as well as greater protection from workplace harassment, among other provisions.

“This hard-fought contract sets a new and transformative standard for San Francisco’s hotel industry,” said Anand Singh, president of UNITE HERE! Local 2. “During more than two months on strike, hotel workers’ resolve never wavered, and neither did the support and solidarity of our community. Now it’s time for every hotel company to follow Marriott’s lead.”

The successful strike is poised to influence dozens of union hotels in the city, including Hyatt and Hilton hotels. Marriott workers’ rallying slogan, “One Job Should Be Enough,” effectively caught the attention of many San Franciscans as well as people around the country who agreed with the message.

“These workers rallied an entire city around their cause,” said Rudy Gonzalez, executive director of the San Francisco Labor Council. “The strike showed that we can win when we stick together. We can take on these multi-national corporations and win.”

“Three generations of my family have to share one apartment because my job at Marriott isn’t enough. Because of what we won in this strike, I’ll be able to afford a better place,” said Candida Kevorkian on the day the contract was settled. Kevorkian works in housekeeping at Marriott’s Westin St. Francis and serves on the union’s bargaining committee along with 180 other rank-and-file hotel workers. “I’m so proud and happy that my coworkers and I stayed strong and united. Together we won a better life.”