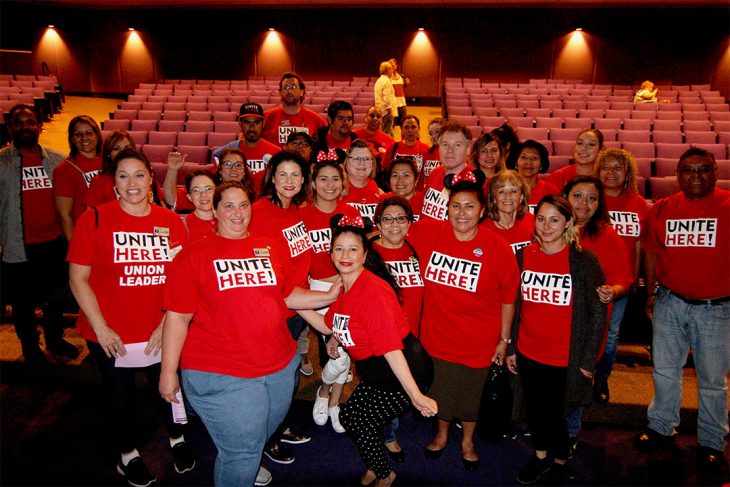 Disgruntled workers at the happiest place on earth finally have something to smile about – their wages.

After months of protests and demonstrations, UNITE HERE! Local 11 and a broad coalition of Disneyland worker unions, including the Service Employees International Union – United Service Workers West (SEIU-USWW) and the American Guild of Variety Artists, achieved a momentous victory, ratifying a new contract in September for nearly 3,000 unionized Disneyland hotel employees. The five-year contract provides a minimum wage of $15 an hour and $1,000 bonuses for cooks, housekeepers, valet attendants, servers and other staff at Disneyland’s hotels. Terms, which also include affordable healthcare options and free educational opportunities, are retroactive to Jan. 1, 2017. Annual hikes will ultimately bring the minimum wage up to $18 an hour by 2021.

The media attention helped supplement Local 11 organizers’ efforts in the community of Anaheim, California, where Disneyland is located. There, after a grueling door-to-door grassroots campaign, they pushed and passed a local ballot measure providing local employers with city subsidies.

“With local employers, like Disneyland, receiving subsidies from taxpayers, they’re then bound to paying a living wage,”said Local 11 Co-President Kurt Petersen. “That’s now the law of land in Anaheim.”

It didn’t hurt that 2016 presidential nominee Bernie Sanders highlighted the issue on his massively followed social media channels. Sanders even came to Anaheim last year for a televised town hall event to meet with hundreds of workers and urge community members to pass the ballot initiative.

“[Sanders] was fantastic and his phenomenal support was a big part in all this,” Briceño said. She also mentioned that, although everything is signed and sealed, Local 11 leaders are still monitoring, waiting to see if Disney honors the terms of the new contract.

“If they don’t, we’ll be taking legal action.” Briceño said.