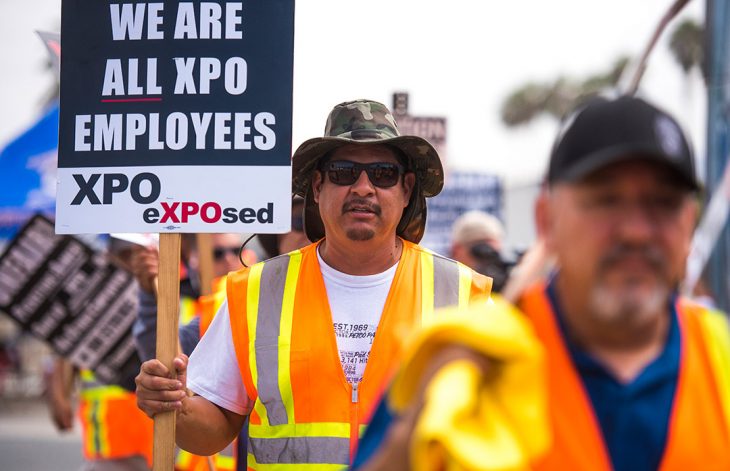 Truck drivers and warehouse workers at the ports of Los Angeles and Long Beach, California are at the gateway of the U.S. supply chain where nearly $300 billion in cargo passes through annually. They’re also at the center of a dire worker’s rights struggle.

A joint effort by the International Brotherhood of Teamsters, its Local 848 and Joint Council 42 is in the midst of a long simmering organizing campaign to put an end to the misclassification of port and nearby railway workers as independent contractors and gain the right to form a union. Made commonplace by multi-billion dollar logistics behemoths XPO Logistics and NFI Industries, the misclassification of port workers is driving egregious wage theft and employee mistreatment. Back in October, port workers engaged in a three-day strike.

“They don’t have workplace protections like Cal/OSHA investigation if they’re injured, workers compensation or unemployment if there’s a layoff,” Barb Maynard, communications director for the “Justice for Port Drivers” campaign, said. “They have no rights. It’s illegal, unconscionable and immoral.”

“The drivers and warehouse workers have prevailed in every single misclassification case they’ve brought to the California Labor Commission,” Maynard added. “ It’s very clear the law is on their side.”

The New Year brought more good news. As of Jan. 1, Senate Bill 1402 takes effect, requiring the state’s labor commissioner’s office to compile lists of trucking companies breaking the law so that retailers contracting them can be held financially accountable.

“Hopefully it’s the beginning of a domino effect,” Maynard said. “It’s not just the other thousands of truck drivers around the country. We’re also joining forces with Uber and Lyft drivers, other misclassified workers. All eyes are on this fight.”