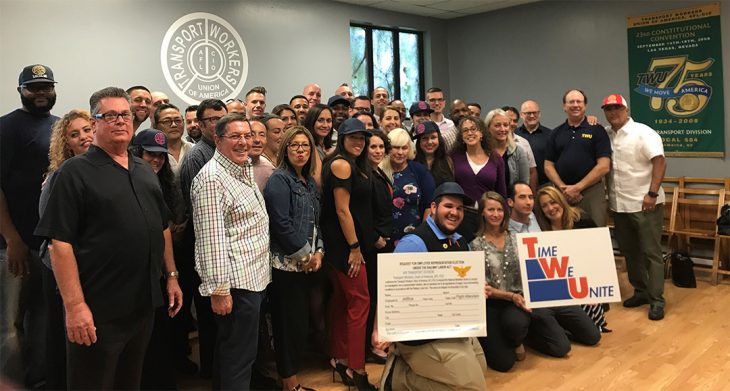 The friendly skies just got a little friendlier. In April, the Transport Workers Union (TWU) won a unionization election for Jet Blue in-flight crew (IFC) – its flight attendants – that TWU’s international president John Samuelsen called “one of the best wins for organized labor” in 2018.

“The whole entire Labor movement is gaining momentum,” Samuelsen said. “The pendulum is starting to slowly swing back in our favor.”

“Organized labor may prevail now and then, but unless there’s a dedicated rank and file commitment you won’t get consistent wins,” Sean Doyle, TWU’s national assistant director of organizing. said “Jet blue was absolutely totally rank and file-driven. It’s the only way to beat management. If it’s all run from an office in Washington, D.C. or New York, it won’t have same vigor.”

The result was a resounding victory with roughly 70% voting to unionize. Now, Jet Blue’s nearly 4,000 airlines operations crew across the country have been inspired and are also in early discussions to unionize.

Doyle, who worked for American Airlines for over 30 years, said changing winds in the industry, such as mergers and acquisitions that could threaten pay, benefits and work-life balance, provided a sense of urgency to organizing efforts.

“But now they’re on the path to collective bargaining that would protect those interests, as well as seniority and the reduction of forced recall transfers, no matter what,” Doyle said.

Throughout TWU’s Jet Blue organizing efforts, the national office remained in contact with Unite Here leaders during their fight to unionize United Airlines food service workers. In October, they too achieved a monumental win.

“It’s very depressing when you put so much time and energy into these fights and come up short,” Samuelsen said. “But everyone worked their butts off and we scored big time.”