The Power Of Union: Striking Hotel Housekeepers Get 40% Pay Hike And First Ever Pension

The Power Of Union: Striking Hotel Housekeepers Get 40% Pay Hike And First Ever Pension 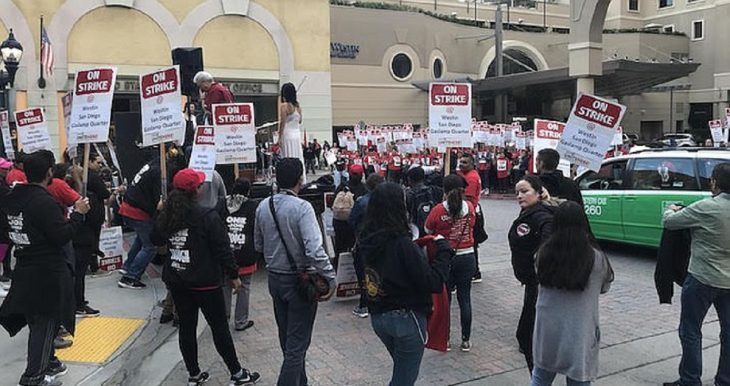 Hotel workers in San Diego have reason to celebrate.

“A more than month-long strike by Westin San Diego Gaslamp workers will deliver a 40 percent pay hike for hotel housekeepers, stronger protections for sexual harassment and a first-time pension.

Details of the new four-year contract were made public Tuesday following the end this week of the last of the hotel walkouts that had targeted Marriott International properties involving 7,700 workers across eight cities in the U.S . . .

The San Diego strike, which marked the first hotel walkout in the county since 2000, when workers at the Hotel del Coronado struck for one day, ended in early November

The financial terms of the agreements negotiated in each of the affected cities varies based on their respective economic demographics. In San Diego, hotel housekeepers, who tend to be among the lowest paid workers and represent the largest of more than two dozen different union job classifications at the Westin, had been earning $14.25 an hour, significantly below their peers at other San Diego union hotels.

With the new agreement, their pay will jump to $18 an hour next July and will increase a few times more until 2022 when hourly wages will reach $20, said Rick Bates, research analyst for Unite Here Local 30. By comparison, housekeepers at the Hotel del Coronado, also a union property, currently earn $18 an hour, and at the San Diego Hilton Bayfront, the hourly pay is $17.35.”

For the rest of the story, visit the San Diego Tribune here.