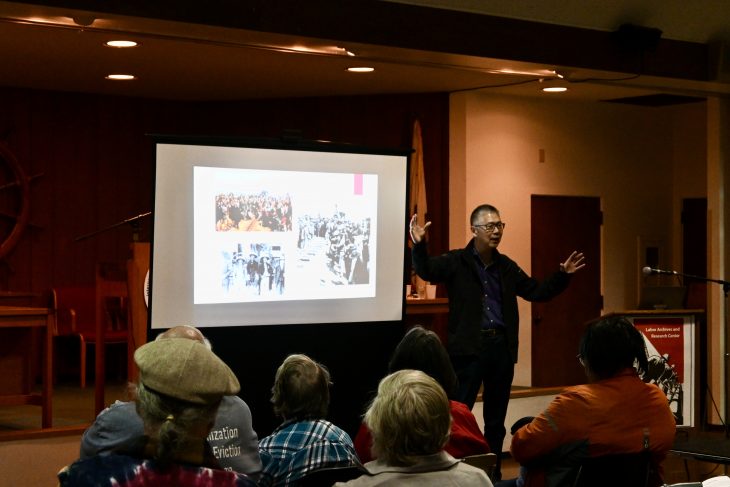 As part of its Annual Program, The Labor Archives and Research Center at San Francisco State University hosted Stanford University historian, Gordon Chang, who spoke about the forgotten stories of the Chinese workers who built the Transcontinental Railroad. Part of San Francisco State University, the Center was founded in 1985 by union leaders, labor activists and university administrators, and works to educate the public about Labor’s heritage through exhibitions, classes and collections that cover over a century of Bay Area Labor history. The event was held on February 28 at the ILWU Local 34 hall.

Chang drew material for his presentation from his recently released book, Ghosts of Gold Mountain: The Epic Story of the Chinese who Built the Transcontinental Railroad. Through his work, Chang strove to showcase the lived experience of Chinese workers who were instrumental in building the Transcontinental Railroad, which was completed in 1869. He said that the railroad transformed America because what had previously been a two to four-month-long journey from New York to San Francisco, became only a six to eight-week railroad ride.

According to Chang, the railroad barons were short the requisite 15,000 workers and so hired thousands of Chinese workers to clear forests, fill ravines, cut through hills and lay tracks, all by hand as there were no power tools. They worked through deep snowdrifts and lived outdoors, earning one dollar per hour for nearly nonstop work. Chang estimated that the Chinese workers’ wages were 30 to 50 percent lower than their white colleagues. In 1867 from June 21 to 28, 3,000 Chinese railroad workers went on strike — the largest Labor action at that point in U. S. history.

“They understood they had power,” Chang said. “Workers know they have power in their numbers, in the value of their labor.”

Pam Tau Lee, Co-Founder of the Chinese Progressive Association, tied the railroad workers’ struggle to modern times. She spoke of an outcry by immigrant Chinese restaurant workers in 2010 that led to study of working conditions in San Francisco’s Chinatown restaurants. Workers told of working ten-hour days for $4 per hour with no overtime, having pay deducted due to taking sick days, jobs terminated because of injuries, and constant verbal abuse. Following a citywide organizing effort, in 2014 the restaurant workers won a wage increase as well as wage theft legal enforcement assistance from the City.

“Today wage theft continues but the difference is that workers are no longer afraid to speak out,” said Lee.