Thinking about RBG, the ERA, the ACLU and PFL, (Etc.) on IWD

Thinking about RBG, the ERA, the ACLU and PFL, (Etc.) on IWD

We’re sure you recognize many of the acronyms in the above headline, but not to worry…we’ll decode the alphabet soup.

Today is International Women’s Day (IWD), a day on which event organizers encourage people worldwide to help forge a more gender-balanced world by “celebrating women’s achievement, raising awareness against bias and taking action for equality. Convinced as they are that “a balanced world is a better world,” the theme of the 2019 day is #BalanceforBetter.

International Women’s Day got us reflecting about a pretty amazing woman: the Honorable Ruth Bader Ginsburg, the Supreme Court Justice who recently returned to work after undergoing surgery for cancer. Justice Ginsburg will celebrate her 86th birthday one week from today (toast the Ides of March!) and apparently thousands are planning to plank on the steps of the Supreme Court in celebration.

Now, despite Justice Ginsburg’s legendarily unassuming personality, the lady has become something of a folk hero through the “Notorious RBG” book, memes, memorabilia and “Saturday Night Live” homages. In 2018, there were two films based on Ginsburg’s life: the documentary “RBG” and Mimi Leder’s “On the Basis of Sex” which starred Felicity Jones as the young Ginsburg.

“On the Basis of Sex” inspired the #AllRiseNow initiative, a joint venture between Participant Media (one of the film’s producers) and the American Civil Liberties Union (ACLU) where Ginsburg once worked and where she co-founded the Women’s Rights Project. The All Rise Now website outlines some of the key issues facing women in the workplace and provides links for individuals to join in advocacy efforts aimed at helping achieve gender justice in the workplace.

This legislation, if passed, would require employers to make accommodations for limitations cause pregnancy and thereby lessen the possibility of employees ultimately being fired or forced to leave their jobs when they become pregnant.

More than half the states currently have legislation that classifies pregnancy discrimination as sexual discrimination, therefore making it illegal. Across the nation, legislation supporting the rights of pregnant women has received largely bipartisan support leading ACLU administrators to remain optimistic that the Pregnancy Workers Fairness Act has a strong chance of getting through both houses and even getting President Trump’s signature.

The Family and Medical Leave Act requires employers with 50 or more employees to provide 12 weeks of unpaid, job-protected leave to care for a new child or for a serious medical condition. But only about 60 percent of workers are covered by it and only about half of those eligible could afford to take unpaid time off.

Looking to close the gap, proponents say the federal Family Act would support not just women, but people of all genders, ages and income levels. It would allow all workers to earn partial income for up to 12 weeks when they need to take time off to deal with a medical issue – their own or a family member’s. This would include the birth and adoption of a child. Eight states – including California and New York – currently have state legislation allowing employee leave. Eight others have partial leave.

Even with the Equal Pay Act and the Lilly Ledbetter Fair Pay Act long on the books, women still earn 80.5 cents for every dollar earned by men. The proposed Paycheck Fairness Act would help workers challenge the wage gap by “preventing retaliation against workers who voluntarily discuss their wages; closing loopholes allowing employers to pay women less than men for performing the same work; prohibiting employers from relying on salary history to determine future pay and providing training data collection and research.

Congress passed the Equal Rights Amendment in 1972, but the states have not ratified the proposed amendment designed to guarantee equal legal rights to all American citizens regardless of sex. The amendment needs 38 states to have ratified the ERA for it to become law and we’re at 37 with Virginia currently working on putting us over the threshold.

“We do think the ERA is gaining traction around the country again with the passage of Nevada and Illinois,” said Lapidus. “We may ramp up those efforts again and the House is likely to hold hearings on the ERA as well.” 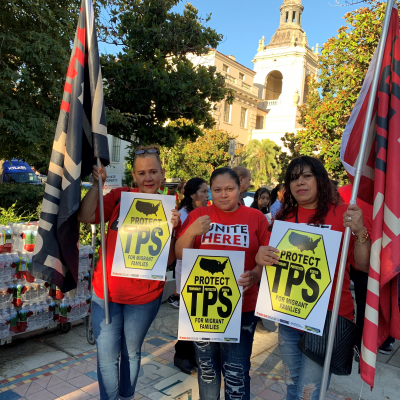