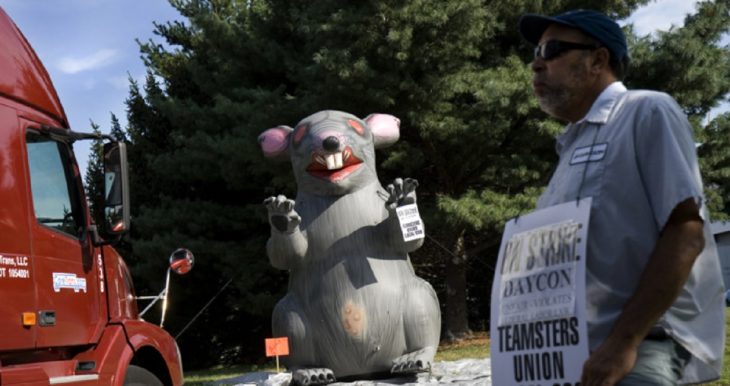 The NLRB General Counsel, a Trump appointee, has his sights set on union inflatables.

“‘Scabby the Rat’ and ‘Corporate Fat Cat’…beware.  A recent National Labor Relations Board (‘NLRB’ or the ‘Board’) Advice Memorandum has suggested that the use of oversized inflatable rats may constitute illegal secondary picketing.

In the Advice Memorandum released May 14, 2019, the Board’s General Counsel pressed the Board’s Chicago office to issue a Complaint against an IBEW local (the “Union”) that used the inflatable balloon of ‘Corporate Fat Cat’ (symbolizing the Employer) choking a construction worker at a neutral employer’s job site.  The Union also distributed handbills and displayed a banner in an attempt to force the general contractor to pressure a subcontractor to pay the ‘area standard’ wages and benefits.  The Union did not have a primary labor dispute with the general contractor, to which the banner and balloon were directed.

The U.S. Supreme Court long has held that handbilling (as opposed to picketing) at a neutral employer’s business is lawful, protected activity.  Three Board decisions issued during President Obama’s terms in office applied the same reasoning towards bannering and inflatable balloons.  In those cases, the NLRB concluded that a stationary banner was only a form of communication and not picketing, which is a combination of communication and conduct.  The Board’s reasoning extended to inflatable rats/cats; absent patrolling and/or blocking ingress or egress to a jobsite, the inflatables constitute lawful Union speech against a neutral.”