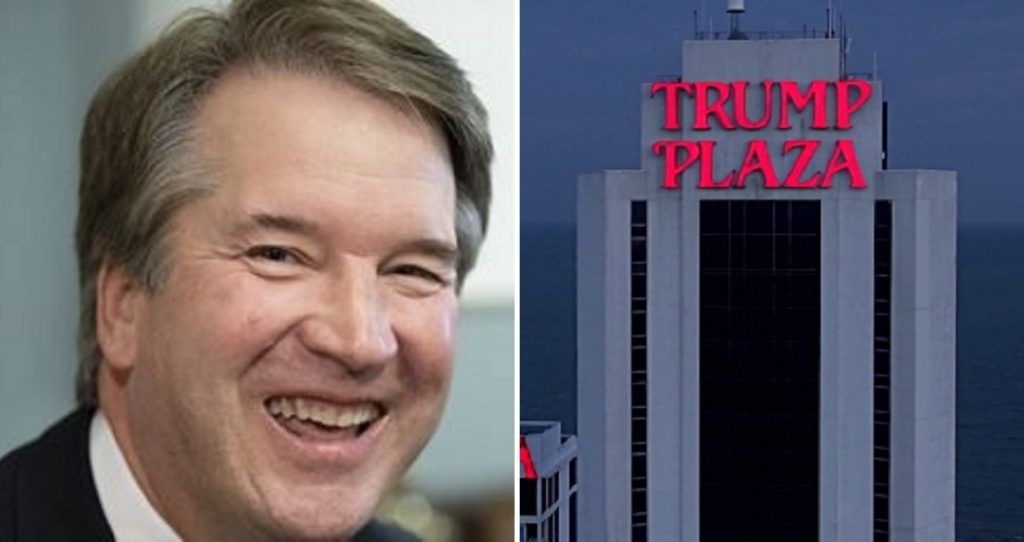 It turns out that President Donald Trump’s nominee for the country’s highest court ruled in favor of one of Trump’s casinos in quashing union activity.

“Six years before President Donald Trump nominated him for the Supreme Court, Judge Brett Kavanaugh sided with Trump Entertainment Resorts’ successful effort to thwart a unionization drive at one of its casinos.

Kavanaugh was one of three Republican-appointed judges who in 2012 voted unanimously to set aside an order by the National Labor Relations Board that would have required the Trump Plaza Hotel and Casino in Atlantic City, New Jersey, to bargain with the United Auto Workers.
The casino has since shut down. But labor advocates point to the case — as well as ones where he backed management at Sheldon Adelson’s Las Vegas Venetian hotel and at SeaWorld after an orca killed a worker — as evidence that Kavanaugh may hobble enforcement of workplace laws and the already-embattled union movement.
‘Kavanaugh, along with Thomas, Alito, Gorsuch — and Roberts along for the ride — will comprise the most radical, anti-labor-law Supreme Court in my lifetime,’ said University of Wyoming law professor Michael Duff, a former attorney for the NLRB, ticking off the names of current members of the high court . . .
The dispute at the Atlantic City casino dates to 2007, when the UAW held a media event with a group of supportive federal and state lawmakers who asserted that they had counted union cards collected from dealers and confirmed that the union had majority support. Six days later, the workers voted 324 to 149 in favor of joining the UAW.

Trump Plaza asked the labor board to throw out the election, saying it had been tainted by the pre-election press conference and other shows of support from politicians that the company said could make workers think the labor board wanted them to unionize. Labor law doesn’t prohibit politicians from supporting or opposing union campaigns, or unions from announcing that they have majority support. But under NLRB precedent, conduct that makes the NLRB itself seem biased can be grounds for invalidating an election.

An NLRB judge rejected the company’s arguments. So did a panel of two NLRB members, including a Republican appointed by President George W. Bush. They wrote that regardless of whether there was anything improper about the UAW’s pre-election event, given the lack of evidence that many employees knew about the event, as well as the UAW’s wide margin of victory, the company hadn’t shown the proof required to overturn an election.

In 2010, after a panel of three Democratic NLRB members ruled that the Trump Plaza was violating federal law by refusing to negotiate with the UAW, the company brought its case to the D.C.-based federal appeals court where Kavanaugh has been a judge since 2006.

At arguments in 2012, an attorney for the company accused the UAW of mounting an ‘elaborate hoax’ that could create a ‘bandwagon effect’ where workers don’t vote against the union because they think it will win anyway.

Kavanaugh pushed back on claims from both sides but directed his harshest comments at the NLRB’s attorney, saying it ‘defies common sense’ to argue that news of the pre-election press conference wouldn’t be widespread, and suggesting that could be a reason to send the case back to the agency for reconsideration.”