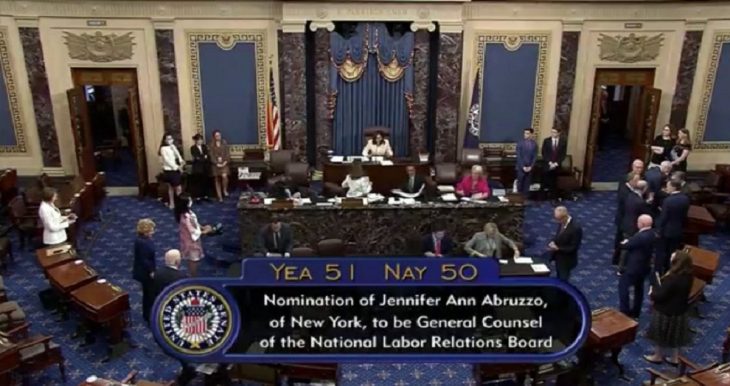 It took a tiebreaker vote by the Vice President for a union-side lawyer to secure Senate confirmation as nation’s top NLRB lawyer.

“The divided U.S. Senate confirmed union lawyer Jennifer Abruzzo to serve as general counsel of the National Labor Relations Board on a party-line vote that reflected the deep political and legal discord over the agency’s future course.

Robb’s Inauguration Day sacking broke with precedent and prompted sharp criticism from Republicans as well as business advocates. Employers have since mounted broad legal challenges in NLRB cases, arguing that Biden lacked authority to fire the Senate-confirmed general counsel of an independent agency without cause. Robb’s term was due to expire in November.

Abruzzo’s confirmation closes a chapter of the Robb saga, giving the Biden administration room to unleash an aggressive enforcement doctrine at the NLRB and re-staff regional offices, which Robb’s critics say were gutted under his leadership. But it’s unclear if Abruzzo’s confirmation will be enough to short-circuit legal challenges from employers, several labor attorneys said in interviews.

Biden’s immediate replacement for Robb, Acting General Counsel Peter Sung Ohr, has faced several legal objections to his authority based on the argument that Robb was fired unlawfully. The NLRB punted on the issue, saying in April that the matter should be left to federal courts, which have yet to issue a definitive ruling on the matter.”