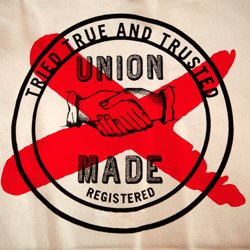 When most people hear the phrase, “union made,” they assume, reasonably, that the product or service in question was actually made by union members.

Apparently, one company disagrees with that premise. ‘Union Made’ – a very upscale clothing store in San Francisco and Los Angeles is very aware that it is selling products that are mostly NOT union made. But it is stealing our good name and reputation anyway.

And now the AFL-CIO and others in the labor movement are not too happy about it. The AFL-CIO has issued a cease and desist letter to the owners of Union Made. In the letter, the AFL-CIO asks the store to change its logo, which is a direct knock off of the AFL-CIO handshake logo, and to change its company name so that it “does not deceive the public into thinking that they are purchasing items that are actually made by union workers.”

If Union Made sounds familiar to you, it’s probably because of the publicity that Labor 411 and Peter Dreier, a professor at Occidental College, brought to the issue back in September. If you missed it, check out Dreier’s excellent article, which appeared in the Huffington Post and the San Francisco Chronicle. It investigates the company’s products and highlights the misleading nature of the store’s name.

Most recently Union Made retail stores were busted by Gawker.