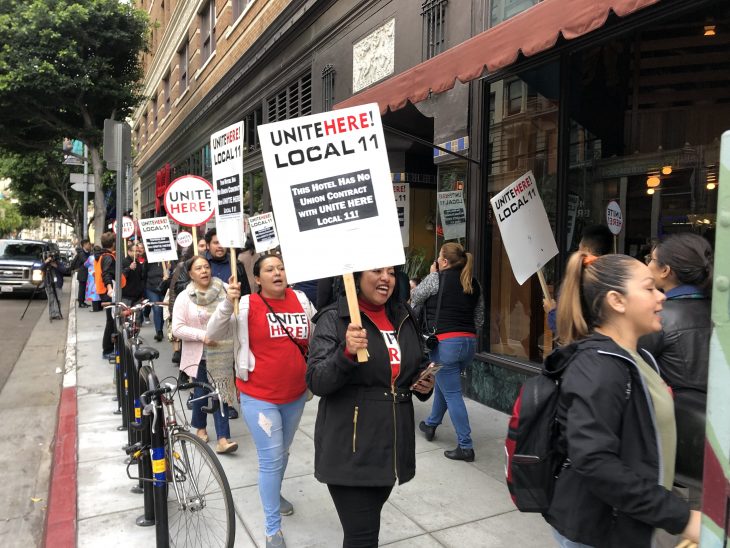 For the past 25 years Unite Here! Local 11 has been striving to elevate the lives of workers in L.A.’s hospitality industry — from hotel workers of many occupations to the city’s scores of food service workers at cafes, restaurants, stadiums and entertainment venues. The long haul of organizing and strikes at dozens of hotels in Orange and Los Angeles Counties has paid off with a repertoire of successes resulting in higher wages, stronger benefits and safer working conditions. Negotiations spanning months have resulted in more affordable health care, implementation of panic buttons so hotel workers can feel safer on the job and stronger protections for immigrants.

According to Susan Minato, Unite Here! Local 11 co-President, the most critical aspect of the work done over the years has been getting members to be more involved in the Union. “We’ve done this through leadership development, getting members involved in their contracts and workers organizing to bring new places into the union,” she said. “The strength of the Union relies on that infrastructure, and that’s what has built Local 11 to where it is today.”

That growth has been pronounced in recent years with Local 11’s membership doubling since 2012, numbering over 30,000 members today. “This represents an increase in power,” said Minato. “We’ve gotten here through hard work and it’s arguable that 10 years ago we wouldn’t have been able to achieve what we have today. We have more representation in the industry so workers can demand more.”

Due to the high cost of living, L.A. families grapple to live sustainably and work towards a better future. Wage increases are key factor towards workers’ ability to sustain themselves, and Local 11 hotel workers recently earned a raise to $25 per hour at 30 hotels across the city. Another major achievement came for Disney workers where wages rose from $11 to $19.

“This has been a big push in Orange County,” said Minato.

“Hospitality workers in Local 11 now have a small pension — that’s a goal for us,” Minato added. “We want stability for workers in their wages, healthcare, pension and ultimately their future.”

Local 11 activities extend beyond union organizing and contract negotiations. Members also engage in non-union and political organizing and were triumphant on May 21 when a longtime Local 11 leader, Betty Guardado, was elected to Phoenix City Council, marking the first time a hotel housekeeper joined that body.

The fight continues. In the midst of a labor dispute with the Terranea Resort, Local 11 is calling on the community to boycott the resort in the wake of reports that multiple employees have been sexually assaulted and harassed while working at the resort. For Minato, the boycott is important because it gives the wider community the opportunity to take responsibility and participate in creating change. “It’s not just about union activity but activity of the whole community,” she said.

Minato conveyed that the work done on both external and internal levels are crucial to the Union’s success. When members are engaged in their own future they work to grow the Union and when Union expands within the industry, there’s greater representation and thus greater power.