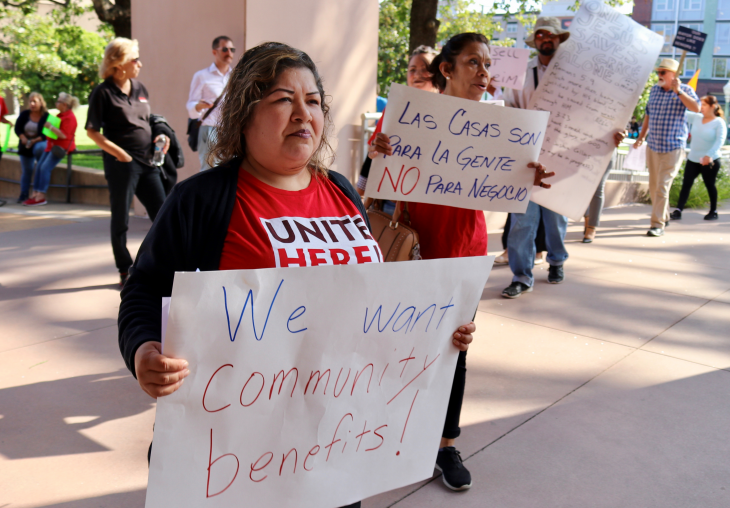 Anaheim, CA—As the Anaheim City Council opened its Tuesday evening meeting, hundreds of workers, renters and local activists rallied on the steps of City Hall to demand an “Honest Anaheim.” Banding together in a joint campaign, they demanded that City leaders serve constituents over corporations, developers, and billionaires like Angels owner Arte Moreno.

Two items on Tuesday’s Council agenda drew the attention of the campaign. First, the council voted to eviscerate the City’s ban on short-term rentals by grandfathering in more than two hundred rental units registered before the ban went into effect. Short-term rental apartments have outraged renters and housing activists who have demonstrated that platforms like Airbnb drive up rents, deplete housing stocks, and threaten home values. By effectively overturning a ban which was put in place in 2016, the vote allows the widespread use of short-term rentals throughout the City—threatening to increase homelessness by removing affordable housing from the housing market.

“When elected officials make the extra effort to overturn a sound housing policy, what kind of message does it send to the working families of Orange County?” asked Ada Briceño, co-president of UNITE HERE Local 11. “This is a shameful reversal by people who should be careful stewards of Anaheim’s housing market—not surrendering it to corporations that don’t seem to care about our community.”

Next, the Council voted down a proposed moratorium on Anaheim rent increases. After several apartment buildings and mobile home parks announced rent hikes as high as $700 a month, Anaheim councilmember Jose Moreno proposed a moratorium on rent increases to protect the City’s most vulnerable renters. Despite an avalanche of public comment in support of the rent hikes, the Council voted down the measure.

“We are families who live check by check,” said 30-year Anaheim resident Esther Gomez. “We have to pay our car, our health insurance, our bills. Yesterday, I had to cancel the insurance for my kids over this situation. Either I pay the rent or my family’s health insurance.”

“At the same time that this council majority is voting against residents and inviting corporations like airbnb, they are allowing extreme rent increases across the city and plan to give Anaheim Stadium to the billionaire Arte Moreno,” said Jeanine Robbins, a founding member of Housing is a Human Right-OC. “We’re fighting to house people experiencing homelessness, and the number one way to fight homelessness is to not let people become homeless in the first place—and these rent increases will make Anaheim residents homeless.”

Both votes come as Anaheim City leaders are facing growing scrutiny over the City’s negotiations with the Angels baseball team whose owner, Arte Moreno, who has reportedly threatened to move the team to Long Beach. Details around the negotiations have been kept from the public, prompting the campaign’s demands for transparency, and what little information has emerged through public information requests suggests backroom dealing with a massive potential cost to taxpayers: previous negotiations could have allowed Moreno to develop nearly 150 acres around Angels Stadium with rent as low as one dollar per year for the next 66 years.

“Angels workers like me make Angels Stadium run,” said Erica Monte, a 5-year employee of Angels Stadium and a member of UNITE HERE Local 11. “The workers and kids in Anaheim deserve better than this. It’s time the Anaheim City Council and Arte Moreno give us transparency and the benefits our community deserves.”

Last month, labor unions, non-profits, and community activists held a town hall to raise awareness around the stadium negotiations and the role of City leaders in allowing mobile home parks to raise rents as high as 58% while giving taxpayer money to the billionaire owner of a successful sports team who, according to reports, effectively receives free rent.

“Mayor Sidhu gives a billionaire free rent and lets Anaheim renters gets pushed into homelessness,” said Rancho La Paz trailer park resident Lupe Ramirez, part of a group of tenants confronting steep rent increases. “A lot of us live on Social Security—you want us to pay four or five hundred dollars more a month in rent? We moved there to retire and live in peace.”