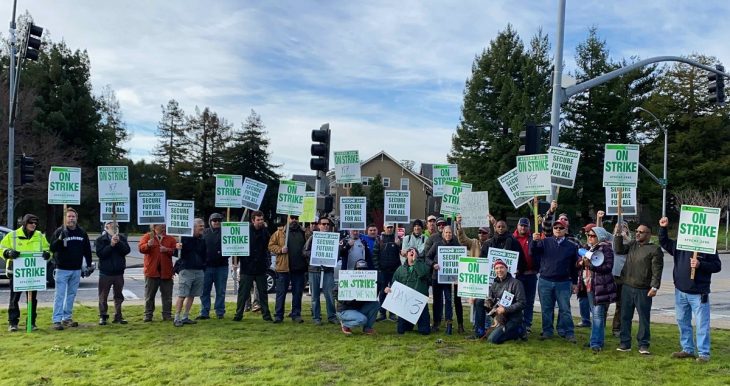 Workers at a California university have ended a strike while another is planning a labor action this week.

“A weekslong strike of dozens of UC Santa Cruz trades workers ended Tuesday with a new contract and a declaration of victory by the workers’ union.

UCSC and the 49-member unit of carpenters, plumbers, electricians and others trades workers — called K7 — ratified the contract Tuesday, according to a campus message and a release from the workers’ AFSCME Local 3299 union . . .

The four-year contract includes a 21% raise between December 2019 and October 2023, better overtime pay, and an extension of existing pension benefits to new members, according to the campus message. It also limits health care cost increases and prohibits union members from striking for the contract’s duration . . .

The trades worker strike was one of at least two labor actions ongoing at UCSC, where scores of graduate students who work as teaching assistants and course instructors have been engaged in a grading strike since Dec. 8. The students are demanding a $1,412 monthly pay increase they say would allow them to afford the high cost of living in Santa Cruz, framing the demand as a cost-of-living adjustment — or ‘COLA.’

More than 12,000 individual course grades were outstanding from the fall quarter as of Jan. 5, the only clear indication of the extent of the strike so far released by campus officials.

Even as the trades workers reached a resolution Tuesday, the graduate students announced a plan to stage a “sick-out” strike Wednesday at UCSC and at UC Santa Barbara. The plan called for student workers to take one of their mandated sick days in an effort to add further pressure to UC administrators.

‘Graduate students at UC Santa Cruz have effectively communicated that we will not submit to business as usual when we cannot afford our rent, when our refrigerators are empty, when we can’t afford medical bills, or to heat our apartments,’ said Veronica Hamilton, a social psychology doctoral student and co-vice president of the UCSC Graduate Student Association, in a prepared release. ‘Graduate students have stood up to the university and said: enough! We are tired of administrative excuses. It’s time for a COLA and we will not stop until we get it.'”

For the rest of the story, visit the Santa Cruz Sentinel here.