Welcome To Trump’s America, Where Thousands Of Federal Workers Use GoFundMe Campaigns To Pay Bills

Welcome To Trump’s America, Where Thousands Of Federal Workers Use GoFundMe Campaigns To Pay Bills 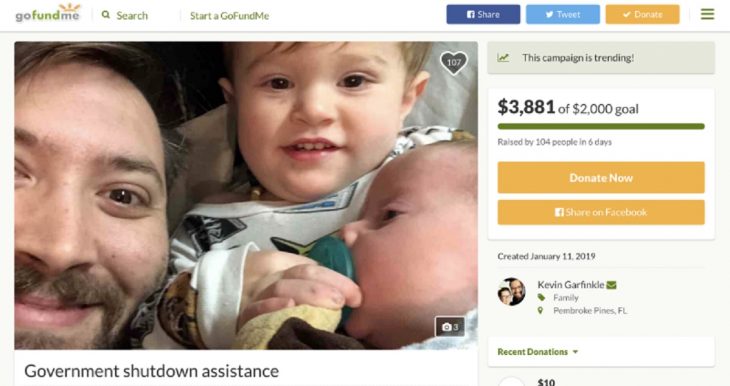 The new reality of trying to pay bills without income has led many federal employees to sites like GoFundMe.

“With federal workers not receiving paychecks as the government shutdown drags on, many have turned to crowdfunding to offset the cost of their growing bills.

As of Jan. 17, approximately 2,000 campaigns have raised over $500,000 to support those impacted by the shutdown, GoFundMe Spokeswoman Katherine Cichy told Yahoo Finance . . .

Kinata Holt, a veteran and federal employee from Missouri, wrote on her GoFundMe pagethat she is a single mother with six children who solely depend on her.

‘My only income has been stopped [due] to the government shutdown,’ her page states. ‘I have sought and exhausted all other resources but they have not been enough to keep up with my bill or my children needs. I am not sure when will be able to return to work and I am merely asking for those who can to please help with a monetary donation of your choice.’

Kevin Garfinkle, an airport employee from Pembroke Pines, Fla., is also asking for donations through GoFundMe.

‘I am my family’s only source of income and due to the partial government shutdown, I will not be receiving a paycheck until the government reopens, even though I am still required to report for duty, which means bills will go unpaid but more so than that I will be unable to buy groceries or diapers for my family,’ he wrote. ‘This is not something I ask lightly. There are many others in the same situation as I find myself in. Anything helps and would be a blessing to my family.’

Even the U.S. Coast Guard has resorted to crowdfunding. The Coast Guard is part of the Department of Homeland Security, one of the federal agencies hit hard by the shutdown. One Coast Guard member’s family created a GoFundMe campaign to raise money for the thousands of members working without pay . . .

Federal workers haven’t received paychecks in nearly a month, and many of them can’t afford a $1,000 shock. According to a Bankrate survey, only 40% of American respondents said they would be able to pay a $1,000 expense from their savings. For many federal workers not being paid, they’re more than likely to need to dip into their savings soon enough.”