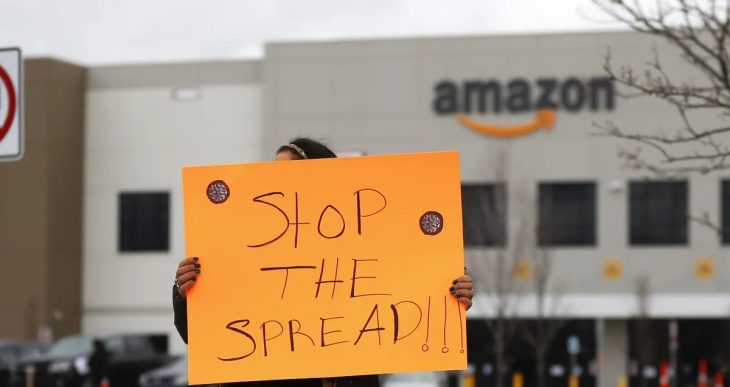 Time magazine reports that “Jeff Bezos added $13 billion to his net worth on Monday, the largest single-day jump for an individual since the Bloomberg Billionaires Index was created in 2012.

Amazon.com shares surged 7.9%, the most since December 2018 on rising optimism about web shopping trends, and are now up 73% this year.

Bezos, Amazon’s 56-year-old founder and the world’s richest person, has seen his fortune swell $74 billion in 2020 to $189.3 billion, despite the U.S. entering its worst economic downturn since the Great Depression. He’s now personally worth more than the market valuation of giants such as Exxon Mobil Corp., Nike Inc. and McDonald’s Corp.”

Meanwhile, Amazon workers are protesting the company for a lack of safety gear as the pandemic and warehouse outbreaks get worse.

According to CNBC, a dozen Amazon workers told the network that “they’re terrified to go to work during the pandemic, while others have expressed frustration over how their employer has responded to the threat of the coronavirus at their workplaces. Many of the workers asked to remain anonymous so as not to upset their employer.”

“In private Facebook groups, warehouse workers from across the country debated the merits of missing shifts because they don’t feel comfortable coming to work,” CNBC reports. “Others question whether Amazon is doing enough to keep workers safe, which often garners responses from workers who say they should feel lucky enough to have a job during a time of economic uncertainty.

Some employees who continue to report to their jobs have added a badge to their Facebook profile picture that reads: ‘I can’t stay home, I work at Amazon.'”

Other employees state that Amazon “has responded to workers’ complaints by cracking down on dissenters. The company has fired at least six employees who were involved in recent worker protests or who spoke out about working conditions at Amazon, including several who were visible leaders within the company on worker issues. Sources told Recode the company has also reprimanded at least six other employees during the same period who were involved in recent protests.”

For more on Bezos and his record-setting day, visit Time magazine here.